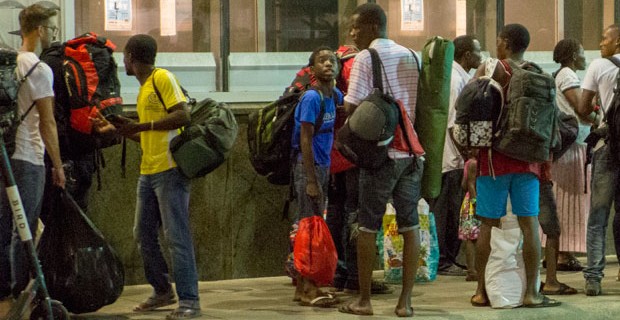 Some U.S. cities are becoming overwhelmed with the number of illegal African migrants arriving from Ebola-stricken countries, with Portland Maine complaining that they are beyond capacity.

Large groups of migrants are arriving from the Democratic Republic of the Congo, which has been hit by one of the biggest ebola outbreaks in history, with 2,000 recorded cases in the last 10 months.

Border Patrol officials said that 500 people from African countries had been arrested by Border Patrol’s Del Rio Sector in Texas alone in the six days after May 30.

Hundreds of the migrants are being sent to a city-owned shelter in San Francisco.

According to Interim Assistant City Manager Dr. Colleen Bridger, officials were not informed by Border Patrol that the migrants were on their way.

The migrants are then being transported to other areas of the United States, including Portland, Maine, where officials complained they were incapable of processing any more.

“The plan was 350 of them would travel from San Antonio to Portland. When we reached out to Portland Maine they said, ‘Please don’t send us any more. We’re already stretched way beyond our capacity,” Bridger said. “So we’re working with them [the migrants] now to identify other cities throughout the United States where they can go and begin their asylum seeking process.”

Residents of San Antonio expressed concerns about the arrival of the migrants, some of whom were being housed in a nearby church.

The charity Catholic Charities of San Antonio is helping to fund the transportation of the migrants to other areas of the country.

“We’re looking at roughly $14,000 a week on bus tickets alone,” the group’s spokesperson, Christina Higgs, told KENS 5. “We’ve been asked several times if we’re worried if the money will run out and we are. It’s obviously a finite resource.”

Meanwhile, Dr Michael Ryan, the executive director of the WHO’s health emergencies program, told BBC News that the global spread of deadly diseases is becoming “a new normal” thanks to “large and highly mobile populations”.