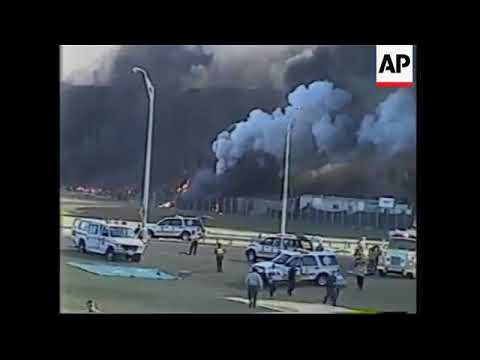 The proof is in the pudding: 9/11 truthers vindicated after video evidence surfaces showing US assets attacking Pentagon on September 11, 2001.

ARLINGTON, Virginia. (INTELLIHUB) — It looks like the United States government has some explaining to do after video evidence has surfaced showing U.S. assets including a large military plane and live warhead-tipped cruise missile being used to attack the Pentagon on September 11, 2001.

The following video shows what looks like a U.S. cruise missile striking the Pentagon. In fact, the tip of the missile becomes visible in one frame of the video as other frames appear to be removed.

Another video, captured just several seconds after the missile impacted the outer ring of the building reportedly shows a large military plane pulling up over the Pentagon after shadowing the missile upon its approach. This is the same thing other eyewitnesses to the event also reported.

According to reports, the damning video was sent to television producer Larry Garrison sometime after the attack. Garrison was said to have submitted the footage to major media outlets which in turn ignored the evidence and refused to broadcast the footage.

“If Garrison’s account is accurate, though, and the video Garrison was sent was authentic, the implications could be huge. If the Pentagon was hit by something other than a Boeing 757–the kind of aircraft that, according to the official narrative of 9/11, crashed into it–this video could reveal that the public has been seriously deceived. And if the footage was made public, its release could lead to a complete reassessment of the 9/11 attacks,” the website TruthUnsealed.com reports.

… the implications are devastating. It means an important video exists, which quite clearly shows the Pentagon being hit on September 11, but this video has been withheld from the public. It means the Pentagon was hit by something much smaller than the Boeing 757 that was officially claimed to have crashed into it, such as a missile. It implies that people who claimed they witnessed a large commercial aircraft crashing into the Pentagon were either mistaken or lying. And it means the public has been lied to about the events of September 11.

Even the official government released video shows what appears to be a cruise missile and not a Boeing 757 passenger airliner as the official story claims.

To boot, a 757 jetliner cannot fly that low and straight (i.e. the nose of a plane would have been pitched up and not flying totally parallel with the ground like a projectile would. At best no plane is seen in the official video which appears to be edited (frames missing).

Moreover, the hole in the Pentagon was only 65 feet across in diameter despite the fact that a 757 is 124 feet from wingtip to wingtip and about 105 feet in height which makes no sense whatsoever.

Additional eyewitness testimony which corroborates the picture captured of the shadow plane can be found in the following MUST WATCH video! It all correlates!

Please send this President Donald Trump (@realDonaldTrump) and Press Secretary Sarah Sanders (@PressSec) and share it far and wide on all forms of social media. THIS INFORMATION MUST BE MADE MAINSTREAM AS 9/11 TRUTHERS HAVE BECOME VINDICATED.

Send this to your state representatives NOW! DEMAND ANSWERS!

Watch the following video in slow motion. Missile or plane?