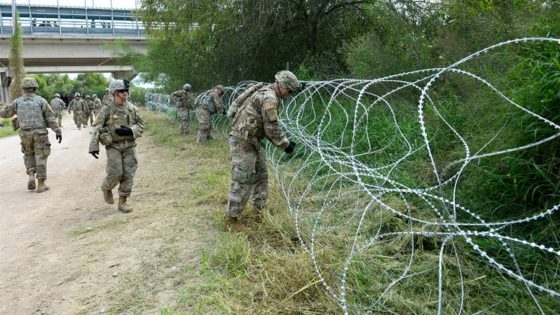 Along with United States Customs and Border Control agents, U.S. troops have been placing barbed wire fencing along the southern border shared with Mexico. The barbed wire appears to be aimed at keeping the migrant caravan, which originated in Honduras, out of the U.S.

The troops have been working to help secure sections of the Texas-Mexico border, in part by laying down barbed-wire fencing, as new photos show. The new protection reportedly includes roughly 1,000 feet of fencing along the Rio Grande, according to a report by the New York Post.

The barrier was installed near the Hidalgo Texas Port of Entry, underneath the McAllen-Hidalgo International Bridge, which crosses the river from Texas into Mexico. A Border Patrol spokesperson said the fencing was being used as part of “necessary preparations” as four caravans, which have grown to include some 12,000 Central American migrants in all, head toward the U.S. border. –Fox News

The caravans have become a pivotal political problem for both the left and the right in recent weeks. In fact, speaking at a campaign rally in Montana on Saturday, President Donald Trump referred to the barbed wire as “beautiful” and said that “barbed wire, used properly, can be a beautiful sight.”

The Trump administration stated last week that they had ordered the deployment of thousands of active-duty troops to support Customs and Border Protection Agents in Texas, Arizona, and California in response to the caravans. Right now, the number of troops sent to help stop the caravans is at 7,000 as ordered by the Pentagon. The president said last Wednesday that the number of troops deployed could reach 15,000.

Trump has also backtracked some in his rhetoric about the caravan. Originally, the president sais that throwing rocks at the military would be met with gunfire. He has now walked that back some, declaring that those who toss rocks will only be arrested, according to a report by Reuters. “They won’t have to fire. What I don’t want is I don’t want these people throwing rocks,” Trump told reporters outside the White House. “If they do that with us, they’re going to be arrested for a long time.”