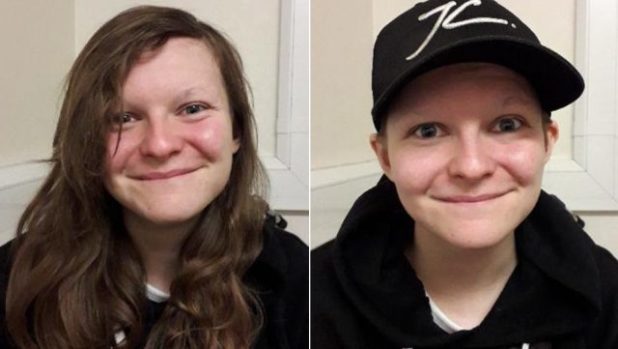 The gay and lesbian agenda is sinful at best and criminally sinful at worst.

A 21-year-old woman, in The UK, posed as a teenage boy with intent to molest young girls.

From The Daily Stormer:

She identified as a teenage boy, so according to Gender Identity Theory, that’s what she is. That’s who she is.

If she sexually identifies as a teenage boy attracted to teenage girls, punishing her for the acts she committed while being true to herself is either punishing her for being who she is or denying her identity.

A 21-year-old woman who posed as a teenage boy to sexually assault up to 50 girls as young as 13 after grooming them online has today been jailed for eight years.

Gemma Watts, from Enfield, north London, travelled the country by train to meet the youngsters, who believed they were in a relationship with a boy close to their own age.

Disguised with her long hair tied into a bun and wearing a baseball cap, baggy jogging bottoms and a hoodie, Watts convinced them she was 16-year-old ‘Jake Waton’.

She didn’t even cut her hair short.

Instead of jailing her, they should be giving her free hormone therapy and sexual reassignment surgeries, helping her discover her true tranny self and stuff.

She would then swap messages with victims, including intimate photographs, using WhatsApp, Snapchat, or text, and speak over the phone before meeting them in person.

She pretended her mother was dead to ‘evoke sympathy’, blackmailed the girls and threatened them by sending images of knives during sexual relationships.

In another incident Watts stuffed socks down her trousers, wore boxer shorts and a hat in the bath and when asked about ‘man boobs’ Watts passed it off as once being overweight.

If you ever asked yourself “how dumb are teenage women anyways?” then that’s your answer right there.

Watts, who once had a promising football career, was jailed today at Winchester Crown Court today after pleading guilty to seven charges including assault by penetration, sexual assault and grooming.

Prosecutor Barnaby Shaw said Watts was ‘adept at both manipulating people and the continuing subterfuge’.

One of her teenage victims, in an impact statement read to the court, said that her ‘heart exploded’ when police revealed Watts’ true identity to her.

In one instance, Watts sexually assaulted the girl in her mother’s bedroom. The court heard how Watts lied to one girl about why her bedroom was pink, saying it was because of a female cousin.

Did that lie work though? It seems that it did work, but it’s not confirmed.

At that point, she should have just “revealed” to her victims the truth: she was born male, then transitioned into female, then regretted it and is now living as a male.

That’s a much more plausible story by current year standards.

The LGBTQ agenda is dangerous.

People have the right to be who they are.

They do not have the right to violate others and try to change them or take advantage of them.

The LGBTQ movement is not happy with being a minority population with rights.

They are actively trying to recruit your children to become part.

This is unhealthy at best and pure evil at worst.

Now, as in the UK, it is starting to show everywhere in criminal actions.

How do you feel about that?