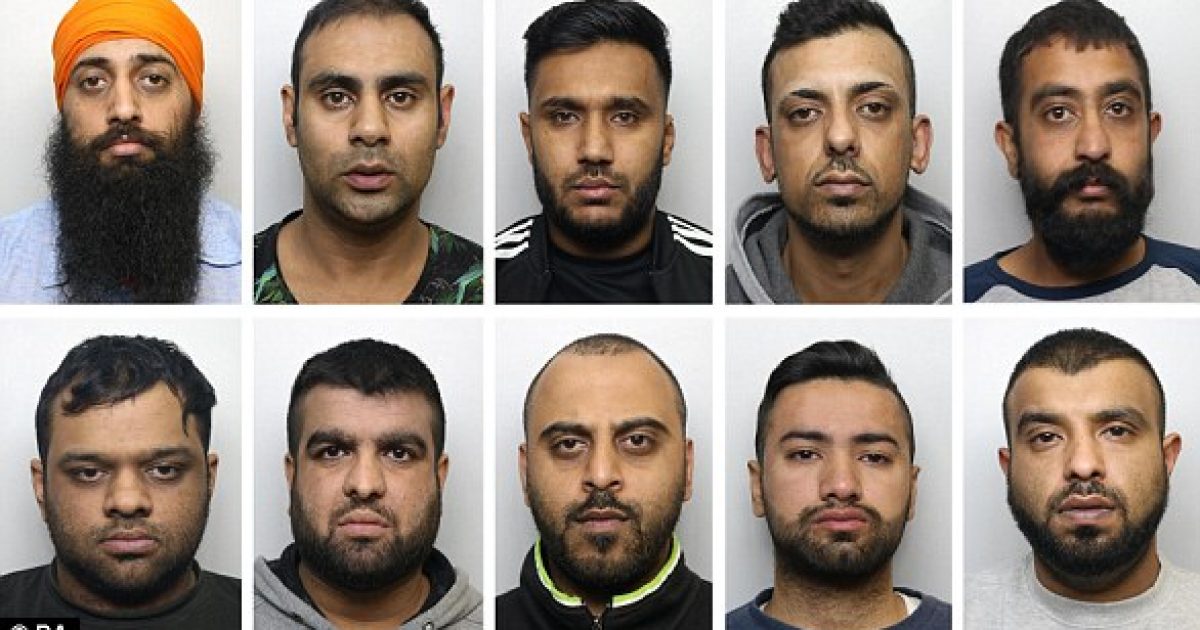 Close to a million non-Muslim tweens and teens have been trafficked by Muslim rape gangs. Nothing was done for decades for fear of appearing “islamophobic.” Tommy Robinson is facing retrial for covering these trials.

Authorities did little to tackle the abusers or save their young victims from their terrible ordeals, often due to fears over being labelled racist.”

Sex slavery and rape of the infidel is sanctioned and rewarded under Islam. Muslim clerics all over the world confirm the right to have sex slaves. It is in the Qur’an — the word of Allah. Islamic doctrines command Muslim men to hate all non-Muslims and to see women—especially infidel women—as little more than sex objects (or, in the words of a Muslim who recently murdered a Christian girl in Pakistan for refusing him sex, “Christian girls are only meant for one thing: the [sexual] pleasure of Muslim men.”

Moreover, Islamic clerics routinely encourage Muslims to migrate to the West and help empower Islam anyway they can—including through propaganda, proselytization, apologetics, births, theft, etc.—and not just through violent jihad. If they do any of these, they technically become jihadis (after all and as the apologists are fond of insisting, jihad literally means “striving” on behalf of Islam.) Thus many Muslim rapists in Europe believe it is their Islamic right and reward to molest and rape infidel women. (more here)

Quran (33:50) – “O Prophet! We have made lawful to thee thy wives to whom thou hast paid their dowers; and those (slaves) whom thy right hand possesses out of the prisoners of war whom Allah has assigned to thee”

Quran (23:5-6) – “..who abstain from sex, except with those joined to them in the marriage bond, or (the captives) whom their right hands possess…”

Quran (4:24) – “And all married women (are forbidden unto you) save those (captives) whom your right hands possess.”

Even the NY Times couldn’t avoid it: ISIS Enshrines a Theology of Rape – The New York Times

The National Crime Agency, often called ‘Britain’s FBI’, is conducting a huge investigation after a 2014 report found more than 1,000 young girls had been abused in the South Yorkshire town.

Scandals have since engulfed other towns and cities, including Newcastle, Telford and most recently Huddersfield, with a series of similar gangs jailed.

Authorities did little to tackle the abusers or save their young victims from their terrible ordeals, often due to fears over being labelled racist.

The latest arrests are part of the ongoing Operation Stovewood investigation.

owards the end of 2018, the NCA said it had 151 designated suspects, 275 other people under investigation and 296 female survivors of exploitation actively engaging with officers.

The NCA has full control of allegations between 1997 and 2013, with 250 staff and an annual budget that will soon reach £15 million a year.

Carl Vessey-Baitson from the National Crime Agency said: ‘Arresting such a large number of individuals as part of one Stovewood sub-operation shows our desire to listen to victims and bring offenders to justice is not wavering.

Detectives investigating historic allegations of child sexual abuse and exploitation in Rotherham have arrested 40 people over the past two months, the National Crime Agency has revealed.

Thirty-eight men and two women are under investigation after 13 victims came forward alleging abuse between 1997 and 2015, the agency said.

The alleged victims were aged between 11 and 26 at the time the offences are said to have taken place.

Suspects aged between 29 and 53 from Sheffield, Rotherham, Leeds, Dewsbury and Maidstone in Kent have been arrested or interviewed by appointment since March.

All have been released under investigation or bailed while enquiries continue.

The probe is part of Operation Stovewood, the National Crime Agency’s (NCA) investigation into Rotherham grooming gangs. The operation has previously led to 14 men being jailed.

Chief investigating officer Carl Vessey-Baitson said: “Arresting such a large number of individuals as part of one Stovewood sub-operation shows our desire to listen to victims and bring offenders to justice is not wavering.

“Stovewood is a challenging and complex investigation, with victims and survivors reliving abuse that took place many years ago.

“To date we have engaged with over 410 victims and survivors and have arrested or interviewed by appointment 94 suspects, meaning this is the largest law enforcement investigation into non-familial CSAE [child sex abuse and exploitation] ever undertaken in the UK.

“Conducting such an investigation can only be achieved with the support and coordination of our partners, and South Yorkshire Police and Rotherham Metropolitan Borough Council continue to provide invaluable assistance”.

The NCA previously said it had identified 1,523 potential victims and 151 grooming suspects, but investigators believe there could be another 275 other offenders who it has not yet been able to name.
Support free-thinking journalism and subscribe to Independent Minds

The agency launched Operation Stovewood, at the invitation of South Yorkshire Police, after Professor Alexis Jay’s 2014 report into the rape, grooming and trafficking of hundreds of children in Rotherham.

The Jay report described how more than 1,400 children had been affected – a figure established by the NCA to be an underestimate.

Some 296 female survivors of exploitation had actively engaged with officers by the end of last year.

The NCA has full control of investigating allegations between 1997 and 2013, with 250 staff working on the case and an annual budget that will soon reach £15m a year.

It is estimated the operation will cost more than £90m by 2024 – the date to which current planning extends.

THE BRITISH TOWNS AND CITIES WHERE ASIAN SEX GANGS WERE EXPOSED

Rotherham – The issue of child abuse in the town first came to light in 2010 when five Asian men were jailed for sexual offences against under-age girls.

Rochdale – The trial of nine men for grooming young white girls for sex attracted widespread public outrage and sparked a national debate when they were convicted in 2012.

The gang received jail sentences of between four and 19 years for offences committed against five girls – aged between 13 and 15 – in and around Rochdale between 2008 and 2010.

The case returned to the public consciousness earlier this year when the BBC broadcast its Three Girls drama based on the experiences of some of the victims.

Newcastle – A total of 17 men and one woman were convicted of, or admitted, charges including rape, supplying drugs and inciting prostitution, in Newcastle last year.

Older men preyed on immature teenagers who were plied with cocaine, cannabis, alcohol or mephedrone (M-Cat), then raped or persuaded into having sexual activity at parties known as ‘sessions’.

The case raised huge controversy after a convicted rapist was paid almost £10,000 of taxpayers’ money to spy on parties where under-age girls were intoxicated and sexually abused.

Northumbria Police launched a major investigation after receiving information from social workers and initially spoke to 108 potential victims. Over the course of four trials, 20 young women gave evidence covering a period from 2011 to 2014.

Oxford – A group of men who abused teenage girls in a vehicle they called the ‘s**gwagon’ were jailed for a total of nearly 90 years in June this year.

The men – aged 36 to 48 – befriended vulnerable girls as young as 13 before plying them drink and drugs at ‘parties’ in Oxford.

The eight men – branded ‘predatory and cynical’ by a judge – were jailed for between seven and a half and fifteen years each.

Victims as young as 13 were preyed upon, sexually abused and trafficked across Bristol to be passed around the men’s friends for money.

Aylesbury – Six men were jailed in 2015 for grooming vulnerable under-age white girls between 2006 and 2012.

The Old Bailey heard victims would be plied with alcohol and forced to perform sex acts for as little as ‘the price of a McDonalds’.

Peterborough – A total of 10 men were convicted of child sex crimes in the town, including ‘predatory’ restaurant boss Mohammed Khubaib.

He was jailed for 13 years at the Old Bailey in 2015, after he was found guilty of forcing a 14-year-old girl to perform a sex act on him and nine counts of trafficking for sexual exploitation, involving girls aged from 12 to 15, between 2010 and 2013.

Telford – Telford became the latest town to become the focus of the now sadly familiar stories of abuse.

A Sunday Mirror investigation concluded that around 1,000 children could have been sexually exploited in the Shropshire town over a 40-year period, leading to calls for a public inquiry.

Huddersfield: 20 sex abusers were jailed for grooming vulnerable girls as young as eleven.

The court heard evidence from 15 victims during the trials and the judge said he fears none of them will ever recover from their ordeals.

In victim statements the girls described coming into contact with the abusers after being bullied at school and said the relationship became ‘one of those things that you couldn’t get out of’.

The case attracted attention after activist Tommy Robinson was jailed for almost causing one trial to collapse.