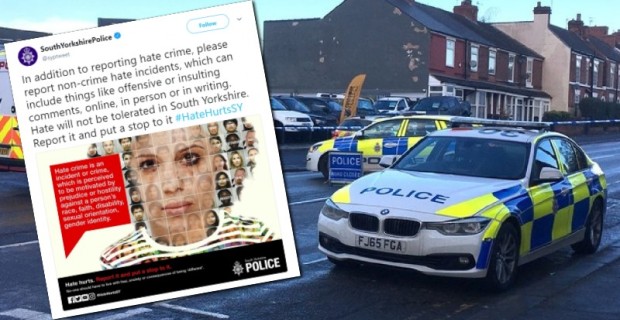 A police force in the UK has been on the receiving end of derision after authorities encouraged citizens to report “offensive comments” that don’t even rise to the level of hate crimes.

“In addition to reporting hate crime, please report non-crime hate incidents, which can include things like offensive or insulting comments, online, in person or in writing. Hate will not be tolerated in South Yorkshire. Report it and put a stop to it,” states the tweet from South Yorkshire Police.

In addition to reporting hate crime, please report non-crime hate incidents, which can include things like offensive or insulting comments, online, in person or in writing. Hate will not be tolerated in South Yorkshire. Report it and put a stop to it #HateHurtsSY pic.twitter.com/p2xf6OLoQZ

An information page was also posted in a follow up tweet that states, “The Police can only prosecute when the law is broken, but we also want to know about non-crime hate incidents. These incidents may not be criminal offences but often can feel like a crime to those affected, and can sometimes escalate to crimes.”

The tweet prompted thousands of responses because it specifically tells people to report incidents that are not even crimes.

“This hadn’t been thought through properly at all. I can imagine e your frontline officers, already overworked, reading that tweet and staring miserably at their workload on the computer, desperately trying to remember why they joined the job,” tweeted one respondent.

“What exactly do you plan to do about non-crime incidents and with what authority will you do it?” asked another.

What exactly do you plan to do about non-crime incidents and with what authority will you do it?

Numerous people drew attention to the absurd situation of a country that has a massive problem with Muslim grooming gangs abusing children, including in Sheffield and Rotherham which are in South Yorkshire, while police forces waste time with “offensive” comments on the Internet.

Indeed, there are currently 98 investigations into the response of South Yorkshire Police to grooming gangs in Rotherham, examining whether there was potential misconduct by officers.

The fact that police resources are being devoted to vague and inconsequential “hate incidents” while the country suffers a violent crime surge is also ludicrous.

Figures released in July show that only 9% of crimes end with suspects being charged or summonsed in England and Wales. In some areas of the country, police are advising citizens that they will stop investigating “low level crimes” like shoplifting, car crime and criminal damage due to budget cuts.

Meanwhile, over 3,000 people in the UK are arrested every year under section 127 of the Communications Act 2003, which makes it illegal to intentionally “cause annoyance, inconvenience or needless anxiety to another.”