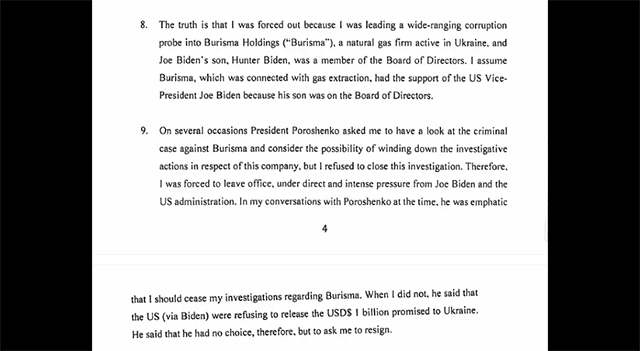 Former Ukrainian General Prosecutor Viktor Shokin said in a sworn affidavit that he was forced out of office because he “was leading a wide-ranging corruption probe” into a company with Joe Biden’s son Hunter on their Board of Directors and then-Vice President Joe Biden threatened to halt $1 billion in US aid to Ukraine unless he was fired.

The Hill’s John Solomon obtained the “once secret” statement, which he said was “prepared for a European Court,” and released it on Thursday.

As Shokin notes in his statement, Joe Biden was filmed bragging about getting him fired by threatening to withhold $1 billion in US aid while speaking to the Council on Foreign Relations on Jan 23, 2018:

This is unbelievably brazen corruption. Biden’s cokehead son Hunter Biden had zero qualifications for working in the natural gas industry yet he was getting paid $50,000 a month just to sit on their board.

"Democrats want to spend the next year explaining why it was perfectly fair for Joe Biden's ne'er-do-well son to get 600k a year from Ukrainian oligarchs…but it's somehow criminal for @POTUS to ask about that…good luck with that!" pic.twitter.com/HA0epsascr

This is the real story of Ukraine-Gate our crooked media and government does not want to be exposed. Instead, they’re demanding President Trump be impeached and executed for treason for daring to look into it!