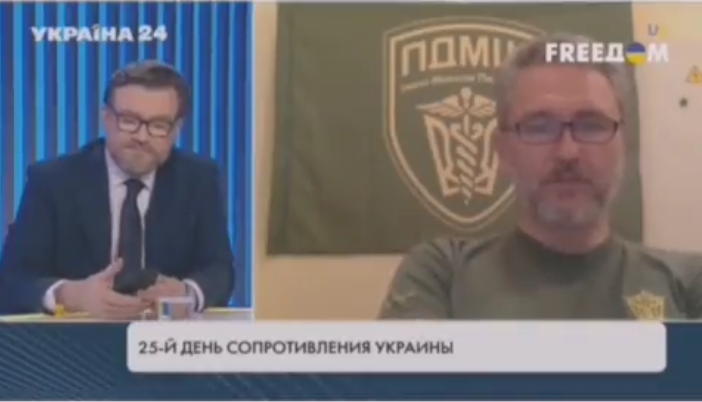 (Natural News) The head of the Ukrainian military’s medical service has stated that “strict orders” were given to Ukrainian soldiers to “castrate all the wounded” Russians who are captured during the ongoing conflict in the Eastern European country.

According to Gennadiy Druzenko, who used to work for the U.S. Agency for International Development (USAID) , Russians “are cockroaches, not humans,” and thus deserve to be treated as such. This is full-on Nazi eugenics in action, and it is being celebrated not only by Druzenko but also by some in the Western media, including CNN.

“Not all fascists wear Swastikas or Wolfsangels,” wrote filmmaker Dan Cohen of Mint Press News in a Twitter post about Druzenko’s statements during a recent Channel 24 interview.

The United States government continues to tell Americans to “support Ukraine,” but this is what they are supporting when they do so: anti-Russia hatred and racism coupled with violence and genocide. Is this what we should be reporting just because Vladimir Putin is supposedly the “bad” guy?

“Druzenko is closely tied to the U.S. government,” Cohen added. “He’s had stints at USAID/Chemonics and the Wilson Center.”

Not long after Druzenko made these heinously racist statements, which, if true, amount to war crimes, he claimed that they were “taken out of context” and were just “emotions.”

“I’m sorry,” he said, still denying that he did anything wrong. “We are saving lives. Period.”

Druzenko’s tune changed after he claimed he received a message containing his personal data, including phone numbers and address, along with a promise that the anonymous person would “come unannounced” to “cut off [his] balls.”

Apparently, Druzenko does not want to get castrated himself, so he decided to issue a statement denying what he said and hoping for the best. It remains to be seen if that will be enough to stave off the ire over his blatant admissions about anti-Russian eugenics.

Fahruddin Sharafmal, a Ukrainian TV host, would seem to agree with Druzenko’s sentiments against the Russian people. He stated on air that he is adopting the “doctrine” of Nazi war criminal Adolf Eichmann, adding that he will “do everything in my power to ensure that you and your children never live on this earth.”

“The reasoning cited by Sharafmal, who is of Middle Eastern origin, was that by mass-murdering a nation’s children, one could eliminate the nation itself,” RT reported.

Like Druzenko, Sharafmal later backtracked and “apologized” for advocating genocide against the Russian people. He said he regrets saying what he did, not because it was wrong, but because it might damage the reputation of Ukrainian troops.

Interestingly, Sharafmal used the same language as Druzenko, blaming “emotions” for his pro-genocide statements. Sharafmal added that because he supposedly lost a friend due to the conflict, he feels much aggression and hatred towards the Russians, though he claimed he will “never be inhuman, unlike the Russians.”

Both Sharafmal and Druzenko are now under investigation in Russia for possible crimes against humanity.

“‘Those were the emotions. I’m sorry. We are saving lives. Period.’ – Dr. Mengele followed ‘the science’ and wanted to save lives, too, but only of the ‘worthy’ like Druzenko does,” wrote a commenter in response to the news.

“This doctor must be arrested and brought before justices,” wrote another. “He is a real danger. Russia is right about Ukraine: there are too many Nazis living there.”

More related news can be found at Chaos.news.