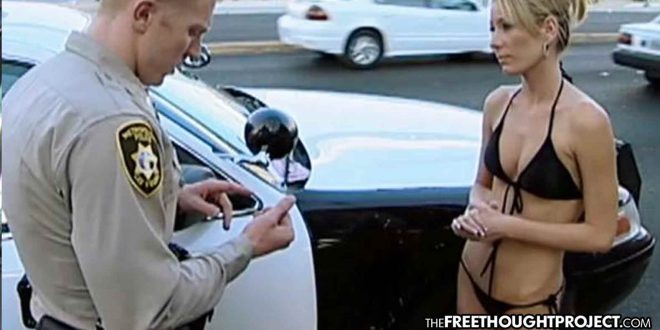 Tonawanda, NY — Over the years, TFTP has reported on utterly asinine requests for special privilege for law enforcement. We’ve seen departments exempt themselves from sex with prostitutes so they could turn around and arrest prostitutes as well as dozens of states that allowed cops to have sex with people in their custody. Now, a town in New York is taking this ridiculousness to the extreme by proposing legislation to allow officers to receive ‘sexual gratuities’ while on duty. Seriously.

As if figuratively licking the boots of an authoritarian state wasn’t good enough, citizens of Tonawanda, New York are pushing the Town Board to change its policies to allow cops to receive literal sexual favors from worshipful citizens.

When this report came across our radar, we originally thought it was satire. However, the Buffalo Chronicle is not The Onion and according to report, this is actually happening.

According to the Chronicle, the Town of Tonawanda is planning to discuss the possible termination of Rider, a veteran public safety dispatcher, after an internal investigation found he committed misconduct on the job. On Monday, the Town Board passed a resolution to let the town supervisor or police chief to discipline dispatcher Brett Rider.

“We want all of our departments to educate their employees and get good training on a variety of topics, harassment being one of them,” said Joseph Emminger, Town of Tonawanda Supervisor.

The Chronicle notes that the policy would not allow officers to request sexual gratuities under any circumstance, but in the event that such a non-monetary gratuity is offered, the officer would not be punished for accepting it, so long as the encounter is less than 15 minutes and the officer declines to take his next scheduled 15 minute break.

Residents are advocating for offering up sex tips to cops as a way to boost morale.

“In this political environment, with all the horrible things being said about our police officers in the national media, this policy would be a real morale booster,” says Karen, a Tonawanda resident and supporter of the policy change who asked that her last name not be published. She is leading a woman’s group that is lobbying for the new policy, and she is encouraging other supporters of the new policy to join her at Monday’s Town Board Meeting, according to the Chronicle.

“Karen” went on to point out that citizens should have the ability to go further than simply licking the proverbial boot by offering to have sex with the boot instead.

“Our police officers are total gentlemen. More times than not, they would politely decline any physical gratuities,” she explains. “People should feel comfortable expressing how much they appreciate the police and the work that they do.”

The group of which Karen is a part of, The Coalition of Suburban Women Voters is also pushing for a similar law at a state level so all cops in New York could receive sex gratuities.

To be clear, cops should be able to have consensual sex with anyone they want while off-duty. But allowing a taxpayer funded government employee to collect a paycheck to have sex is like something out of the Roman Empire.

What’s more, given the propensity of police officers to commit crimes of sexual misconduct, legislation like this would open Pandora’s box by intertwining sex with authority figures for favors or special treatment under the law. It would be rife with abuse and the fact that anyone is considering it speaks to the ridiculous level of statism in which the land of the free currently finds itself.