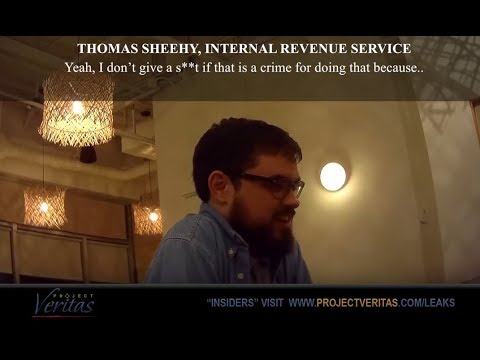 James O’Keefe’s series of undercover videos exposing the Deep State has produced a fourth installment in which two Internal Revenue Service (IRS) officials talk about the unfair treatment the that IRS engaged in of conservative non-profit groups. Among the things said in the video was something that was particularly noteworthy and that was that these men believed that if a group was conservative, then they were deemed to be given increased scrutiny over those that were not. In fact, though they knew it was a crime to do it, they didn’t care.

The two men in the video below are Thomas Sheehy, an IRS tax examiner and member of the Austin Democratic Socialists of America in Texas, and Jerry Semasek, an IRS attorney in Washington, DC.

The IRS has been a political weapon against American citizens, most notably under the usurper, Barack Hussein Obama Soetoro Sobarkah. Judicial Watch President Tom Fitton once said, “President Obama’s IRS was used against his opponents to help him win reelection.”

One of the things that is probably the most concerning is the destruction of evidence in the case of targeting conservative groups.

SHEEHY: “John Koskinen. He got a lot of flak for giving increased scrutiny to these Tea Party groups. Conservatives got really mad at him, he was so cool though because he deleted all the emails, so they could not hold any evidence against him.”

SHEEHY: “Yeah, I don’t give a s**t if that is a crime for doing that because… you should give increased scrutiny to those groups because a lot of them are just f***ing fronts for the Koch brothers or whatever.”

One wonders is Sheehy is beginning to care now that this video is out with his name on it.

Sheehy’s reference to “deleted all the emails” recalls allegations from 2015 and 2016, when Republican lawmakers accused Lerner and Koskinen of obstructing justice and destroying subpoenaed evidence. Jason Chaffetz (R-UT) introduced a resolution to impeach Koskinen for “high crimes and misdemeanors.” The charges against him included false statements to Congress:

Commissioner Koskinen failed to locate and preserve IRS records in accordance with a congressional subpoena and an internal preservation order. The IRS erased 422 backup tapes containing as many as 24,000 of Lois Lerner’s emails – key pieces of evidence that were destroyed on Koskinen’s watch.

When the agency determined Ms. Lerner’s emails were missing, Commissioner Koskinen testified the emails were unrecoverable. These statements were false.

Koskinen never admitted to any intentional wrongdoing or obstruction: “We did not succeed in preserving all of the information requested,” he told the House Judiciary Committee. “[A]nd some of my testimony later proved mistaken. I regret both of those failings.”

Sheehy’s characterization of the episode — “he deleted all the emails” — suggests a more deliberate course of action, though it is unclear whether he has firsthand knowledge to support that description.

The hypocrisy is also glaring in that Semasek told Project Veritas, “The law requires that an organization can’t be political, it can’t be partisan to be tax exempt… Those employees in Cincinnati Ohio started to separate them and put them in a pile. And it turns out that they were like the Tea Party group of people. And I think they did, like Lois Lerner and maybe some of her employees were more liberal-leaning or Democrats so I don’t know if they disallowed them, but they required them to produce more documentation to try to prove that they weren’t partisan.”

Now, consider that you can be one who investigates these applications to determine whether the group is political or not in order to gain the non-profit status, but you can be as political as you want.

“My friend Chris, like, he does a lot of like tech stuff,” Sheehy said. “He even runs the f**kin’, I was looking over his shoulder once at the electoral forum and I noticed that he actually is on the national social media working group. So, he helps run the national Twitter account. He also runs our local Twitter account. He also is one that does all the bylaws and stuff… he also works for the IRS.”

Sheehy indicated that he would lie to use his “benefits” of sick days and paid time off in order to engage in socialist activism for Austin Democratic Socialists of America.

“I will say, I just really like the benefits. I get a lot of paid time off and sick days,” he said. “So, like, for DSA stuff, I can just honestly… I will just stay late for a period. So, I will just call in for the next day.”

“I mean, as long as like the manager doesn’t find out and you don’t explicitly say, ‘hey I’m calling in sick to do Democratic Socialist of America work” then I mean, like yeah,” he added. “You know, you just gotta, you just gotta like sort of manage, you know, when and where you’re like doing, like, the work you do.”

Is anyone else fuming over this and thinks that he just confessed to a fraud of taxpayer money? I am.

Will we see any investigation into these men and their participation in criminal activity? I’m doubting it because, in 2017, the Justice Department settled a class-action lawsuitbecause of the IRS’ political targeting. While Attorney General Jeff Sessions admitted the Obama administration used “inappropriate criteria to screen applications for 501(c) status” disproportionately affecting conservatives, including requests for “highly sensitive information,” he declined to prosecute principal players in the scandal like Lerner.

See how that works? No justice from the Justice Department.

Project Veritas founder James O’Keefe said, “As our deep state investigation continues to unfold, four government agencies have responded resulting in the removal of two federal employees from their job duties. Stay tuned to see which Government Agency we unmask next.“