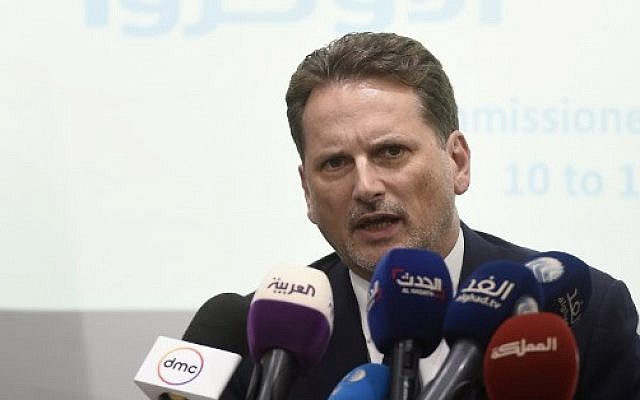 The agency is a fraud, the premise on which it exists is false so what would you expect to happen?

Back in May United States and Israel called for UNRWA, the U.N. agency that oversees the so-called “Palestinian refugees”, to cease operations.

Palestine has never been a state. UNRWA was established by the U.N. General Assembly in 1949 to assist Arabs who became refugees during Israel’s War of Independence the previous year.

“UNRWA has been empowering the refugee problem for years, instead of trying to solve it while adopting a unilateral political position,” responded Israeli Ambassador to the United Nations Danny Danon. “UNRWA failed to rehabilitate the Gaza Strip and succeeded only in inciting violence against the State of Israel. UNRWA’s mandate must come to an end,” added Danon.

“The organization’s schools have been transformed into terror and incitement infrastructures, with textbooks distributed on the ground denying Israel’s existence, and underground tunnels dug by Hamas.”Pierre Krähenbühl, the UNRWA representative, at a U.N. Security Council special discussion about the agency.

“PEOPLE WERE PROMOTED BY HOW CLOSE THEY WERE, [AND THEY] ACTED VENGEFULLY AGAINST MEMBERS OF THE ORGANIZATION AND EXPLOITED THEIR POWER IN MANY WAYS,” ACCORDING TO THE REPORT.

A report by the ethics department of the United Nations Relief and Works Agency (UNRWA) has uncovered grave misconduct and corruption in the agency, which deals with Palestinian refugees throughout the Middle East, West Bank and Jerusalem.

The report, prepared by the ethics department of the agency and published by Al Jazeera, points towards the commissioner-general of the agency, Pierre Krahenbuhl, as the focus of the corruption, and accuses him of centralizing management, exploiting his power to promote associates and neglecting his role in favor of extensive travel around the world. The report was transferred to the UN Internal Audit Department, where they refused to comment on the investigation since it has not yet been completed.

The report claims that Krahenbuhl and his close circle acted “inappropriately.”

“People were promoted by how close they were, [and they]acted vengefully against members of the organization and exploited their power in many ways” starting from 2015, a year after Krahenbuhl was appointed, according to the report. The economic crisis in the organization following the cessation of US aid was also used as an excuse for centralizing power in the hands of the commissioner-general and those close to him. The report mentions that due to this behavior, an environment of low morale developed in the organization, alongside fears of revenge, bullying and secret-keeping that led to the collapse of the regular management of UNRWA.

Krahenbuhl responded to the Al Jazeera report and claimed that “if the UN investigation finds room for corrections in the organization, I will not hesitate to execute them, although all claims that I or the management of the organization don’t relate to our roles with the seriousness demanded are baseless and mistaken. It is on us to examine the findings of the report when it comes out, and not to rely on rumors. The accusations are false and fabricated.”