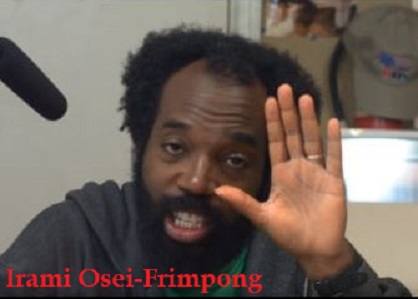 This post was first published at Fellowship of the Minds

Irami Osei-Frimpong is a graduate student, teaching assistant, and a Ph.D. candidate in philosophy at the University of Georgia.

Osei-Frimpong is a racist and advocate of violence against white people:

It took a Facebook comment on January 16, 2019, that finally gave Osei-Frimpong much-needed public scrutiny. As reported by Campus Reform, he posted this now-deleted genocidal and condescending comment on the University of Georgia’s Facebook page:

“Some white people may have to die for black communities to be made whole in this struggle to advance to freedom. To pretend that’s not the case is ahistorical and dangerously naive.”

University administrators at first dismissed student complaints about Osei-Frimpong’s statements, claiming they were made “in his capacity as a private citizen on his personal social media accounts. At this point, we are unaware of any allegation of racially hostile or discriminatory conduct in the course of his professional duties or any statements falling outside of First Amendment protections.”

The university only altered its position that Osei-Frimpong’s Facebook comment was First Amendment-protected free speech after numerous online reports of his comment — including coverage by the university’s conservative student paper, Arch Conservative — and threats by large donors that they would withhold donating. (College Fix)

But the university continued to drag their feet for months.

Finally, in a public hearing on April 20, 2019, the university found an excuse — that Osei-Frimpong had violated its student code of conduct by lying in his graduate school application in December 2015, for which he may be dismissed from the university:

As reported by the AJC (Atlantic Journal-Constitution), near the end of January, the university received an anonymous call that Osei-Frimpong had omitted from his graduate school application his arrest in October 2011 for participating in an Occupy Wall Street protest during his studies at the University of Chicago.

At a six-hours-long public hearing on April 20, 2019, Osei-Frimpong claimed that the complaint against him is an attempt to “chill” his speech rights. He maintained that he left out his prior studies in political science at the University of Chicago because he was only thinking about schools where he had studied philosophy, and argued that he correctly had answered the question about prior charges or convictions because an Illinois judge had dismissed the charges against him.