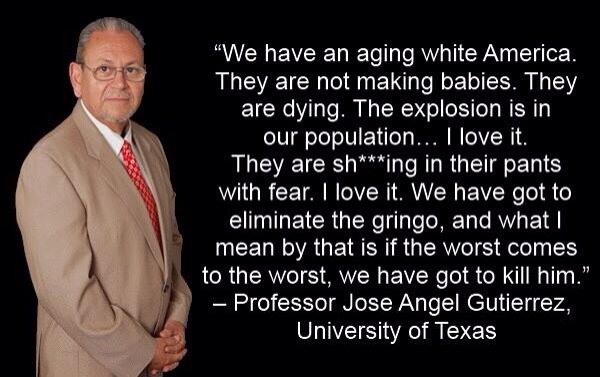 There’s a meme circulating in the AltMedia, of a quote attributed to José Angel Gutierrez:

So I looked into this, to ascertain the meme’s authenticity.

Gutierrez indeed is a professor of political science at the University of Texas – Arlington. Below is a screenshot I took of his page on UOT’s website. Note the “Proffessor” typo:

In defense of himself, Gutierrez wrote this essay for The Texas Civil Rights Review, which calls itself the “Lone Star of Conscience”.

Below is the essay in its entirety (I added the bold red emphasis). Read it, and tell me what you think.

THE ORIGINS OF THE “ELIMINATE THE GRINGO” QUOTE

Originally published en espanol in La Estrella newspaper of Fort Worth, reprinted by permission of author.

I was the head of the Mexican American Youth Organization (MAYO) in Texas in 1969 having just return from military duty during the Vietnam War. I held a press conference in San Antonio, Texas on April 11, 1969 to announce our organizational plans.

This is what I said:

“MAYO had found that both federal and religious programs aimed at social change do not meet the needs of the Mexicanos of this state.

“Further, we find that the vicious cultural genocide being inflicted upon La Raza by gringos and their institutions not only severely damage our human dignity but also make it impossible for La Raza to develop its right of self-determination.

“For these reasons, top priority is given to identifying and exposing the gringo. We also promote the social welfare of Mexicanos through education designed to enlarge the capabilities of indigenous leaders.

“We hope to secure our human and civil rights, to eliminate bigotry and racism, to lessen the tensions in our barrios and combat the deterioration of our communities.

“Our organization, largely comprised of youth, is committed to effecting meaningful social change. Social change that will enable La Raza to become masters of their destiny, owners of their resources, both human and natural, and a culturally and spiritually separate people from the gringo.

“Only through this program, we of MAYO, see the possibility of surviving this century as a free and complete family of Mexicanos. We will not try to assimilate into this gringo society in Texas, nor will we encourage anybody else to do so.

“Rather, MAYO once again asks of friends here and across the nation to assist us in our efforts. We intend to become free as a people in order to enjoy the abundance of our country and share it with those less fortunate.

“MAYO will not engage in controversy with fellow Mexicanos regardless of how unfounded and vindictive their accusations may be. We realize that the effects of cultural genocide takes many forms—some Mexicanos will become psychologically castrated, others will become demagogues and gringos as well and others will come together, resist and eliminate the gringo. We will be the latter.”

Questions followed the press statement, particularly from Kemper Diehl, a reporter with the San Antonio Express News. He wrote an article on the press conference and printed his version of an exchange:

Q: What do you mean by ‘eliminate the gringo?’

A: “You can eliminate an individual in various ways. You can certainly kill him but that is not our intent at this moment. You can remove the base of support that he operates from be it economic, political, social. That is what we intend to do.”

Kemper Diehl wrote more: “Gutierrez was again pressed as to intentions of killing gringos ‘if worst comes to worst.’ He replied ‘If worst comes to worst and we have to resort to that means, it would be self-defense.’ ” Gutierrez went on to be quoted as detailing attempts on his life and property just a few years before.

For the record, this was a press conference 38 years ago! It was not a press conference held yesterday much less statements made by me in my class room at the university. Since immigration and anti-Mexican attitudes are now the talk of the day particularly on national radio and television I have been resurrected.

Lastly, about 2 years ago Alan Wall that works and lives in Mexico put together words as if they were mine and posted them on VDARE.com claiming they were mine. Soon these quotes appeared in many extreme right wing websites. Two months ago David Horowitz included me in a list of the 101 Most Dangerous Professors in the United States and cited these Allan Wall quotes as his evidence. Reporters today are now citing them over and over again today.