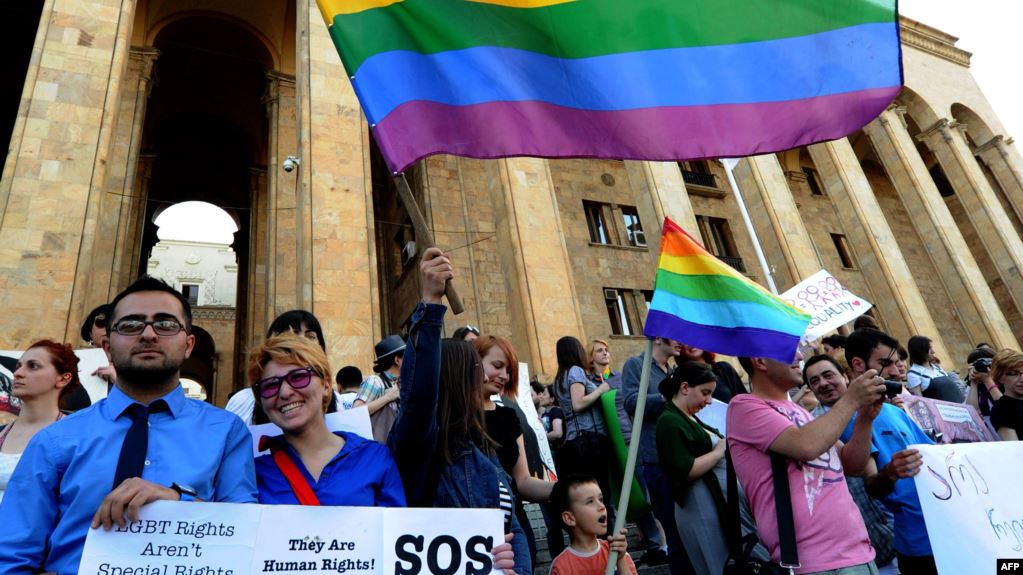 Today 84% of the population in Georgia practices Orthodox Christianity, primarily the Georgian Orthodox Church. Of these, around 2% follow the Russian Orthodox Church, around 5.9% (almost all of whom are ethnic Armenians) follow the Armenian Apostolic Church and 0.8% are Catholics and are mainly found in the south of Georgia but with a small number in its capital, Tbilisi. –WIKIPEDIA

Six years ago the LGBT movement tried to put its stamp on Georgia.

Six years on, the violent scene remains imprinted in the minds of Georgia’s LGBT community: dozens of gay rights demonstrators being beaten in the streets of Tbilisi by black-frocked priests and far-right protesters, some bearing clubs and other weapons. The modern-day pogrom in 2013 seemed like a warning: whatever Georgia’s aspirations to join Europe, its queer community would be left behind.

But this week activists are planning the country’s first LGBT pride events in a gambit to convert the underground explosion of queer culture in Georgia into political change. Arrayed against them are conservative and Christian activists and a police force that says they can’t guarantee the safety of the protesters. Many fear the violence of 2013 could be repeated.

Some further background from 2013:

An anti-homophobic rally was held in Tbilisi, Georgia, on May 17, 2013, the International Day Against Homophobia. The gay rights activists holding the rally were met by thousands of protestors opposing homosexuality, who were allowed to break through a police cordon[5] and violently pursued them, beating and throwing stones at them. The rally, organized by Georgian LGBT-rights organization Identoba, was the first officially sanctioned anti-homophobic demonstration held in Georgia.[3]

Two days earlier, Ilia II of Georgia, the head of the Georgian Orthodox Church, had called for banning the gay rights rally, describing homosexuality as an “anomaly and disease.”[6] The day before the rally, Prime Minister Bidzina Ivanishvili stated that LGBT individuals “have the same rights as any other social groups” in Georgia.[7]

Dozens of gay rights activists had gathered in downtown Tbilisi for the rally. A reported 20,000 Georgian Orthodox church members protested, led by church priests, and a clash ensued in Pushkin Park, near Freedom Square.[3] Police forces did not prevent the homophobic protesters from running at the anti-homophobia rally participants,[8] as priests asked.[5] Anti-homophobia demonstrators were evacuated by the police in buses, which were attacked by the counter-demonstrators.[9]According to different sources, 17[10] to 28[3] people were injured as a results of the clashes.

The US Embassy and George Soros believe that 2019 is the year to try it again.

Make no mistake America, your American embassies do not only push the good of America, they also push her perversions.

Pick up the below video at the 18:45 mark to hear about the gay pride parade that is coming to Georgia, and to get a feeling how the citizens feel about it.

97% are opposed according to Levan Vasadze and the parties pushing it include our own American Embassy and George Soros.

For years, social liberals have attempted to force LGBT ideology on the Republic of Georgia, a profoundly Christian country with deeply good people, amazing food, and—most importantly—strong traditional values. Unfortunately, the United States’ own Embassy has again and again pushed for the LGBT agenda and is currently supporting a so-called “Pride Parade” which has been strongly condemned by the Georgian Orthodox Church. The Patriarch of Georgia, His Holiness Ilya II, is a kind and holy man (with whom I was blessed to meet when he spoke at WCF X in Tbilisi). Patriarch Ilya has made clear that Georgian Christians will not be silent while their Christian roots are undermined and attacked.

Matters of faith and family should be decided for Georgia by Georgians and not by powerful outside forces trying to push their own ideology. Now thousands of Christians in Tbilisi are peacefully but vocally taking to the streets to defend their values, led by Levan Vasadze. As usual, the mainstream media has repeatedly lied in their attempts to smear this movement, claiming that it supports hatred and violence. Nothing could be further from the truth.

While I am all for the America that protects those that cannot protect themselves, those days seem to be much in our past.

Today America, due to its liberal infusion, is more a country that pushes ideologies where things are working just fine without intervention.

I’d say that a country that is 84% Christian needs to be teaching us where we may have gone wrong, rather than us trying to spread our diseased culture to them.