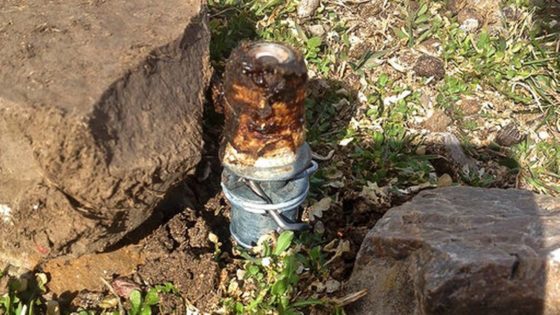 Even though a federal worker put the cyanide trap near the families home by mistake, the government claims any injuries were caused by the negligence of the parents and child, the U.S. Department of Justice said in documents filed Monday in U.S. District Court. The DOJ also asked for the family’s lawsuit to be dismissed, according to The Idaho Statesman.

Mark and Theresa Mansfield of Pocatello sued the federal government in June seeking more than $75,000 in damages and more than $75,000 for pain and suffering. The lawsuit contends that an Agriculture Department worker acknowledged to law enforcement officials placing the trap in error on land managed by the U.S. Bureau of Land Management. The court document filed by the Justice Department does not acknowledge such an error. But why would it? The government never takes responsibility for the death and destruction they cause.

According to the lawsuit, the Mansfields claim that their son, Canyon Mansfield, was playing with his dog in March 2017 when the then-14-year-old triggered the trap that the U.S. Department of Agriculture placed to kill coyotes. The dog died, and the teen still has headaches from the poison, the lawsuit stated. “When he [Canyon Mansfield] reached down and touched the pipe, it exploded with a loud bang, knocking CM to the ground and spewing an orange powdery substance,” the lawsuit says.

The Justice Department disputes that there was an explosion, noting that M-44s are spring-activated and contain no explosive material.

The devices, which are called M-44s, are embedded in the ground and look a lot like lawn sprinklers but they spray poisonous cyanide when they are set off. The M-44 cyanid traps are meant to protect livestock from predators but sometimes kill pets and injure people, as seen in this case. The traps have also draw increased scrutiny after The Associated Press reported that the teen was injured months after the government decided to stop using the devices on federal lands in Idaho.

The agency said in court documents that “defendant admits that two M-44 devices placed by (a federal) employee were discharged in the incident involving CM and his dog.”

The reason for the discrepancy is not clear. The Justice Department didn’t respond to that question. –The Idaho Statesman

Andrea Santarsiere, an attorney with the Center for Biological Diversity, who ultimately hopes to get M-44s banned entirely, said the federal government’s response to the Mansfield lawsuit was disappointing. “Rather than apologize for having a poisonous device on public lands that injured a young boy and killed his dog, the government instead is using a tactic to blame the boy,” she said.