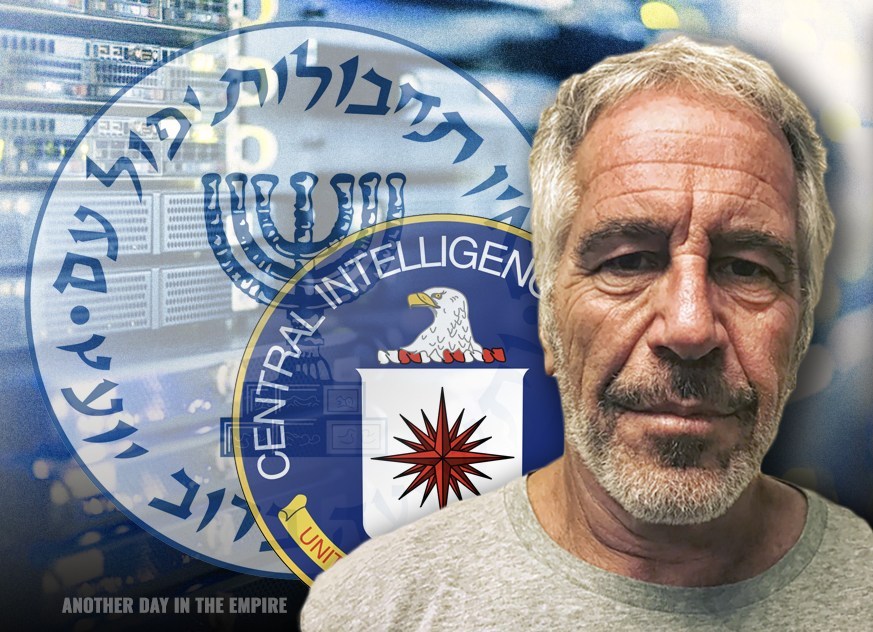 If you’re interested in the backstory on Jeffrey Epstein—a story largely ignored by the corporate media—read Whitney Webb’s How the CIA, Mossad and “the Epstein Network” are Exploiting Mass Shootings to Create an Orwellian Nightmare.

The subhead reads: “Following another catastrophic mass shooting or crisis event, Orwellian ‘solutions’ are set to be foisted on a frightened American public by the very network connected, not only to Jeffrey Epstein, but to a litany of crimes and a frightening history of plans to crush internal dissent in the United States.”

Perhaps most disturbing of all, whatever technological solution is adopted by the Trump administration [to address mass shootings], it is set to use a controversial database first developed as part of a secretive U.S. government program that involved notorious Iran-Contra figures like Oliver North as a means of tracking and flagging potential American dissidents for increased surveillance and detention in the event of a vaguely defined “national emergency.”

North and associates used PROMIS (Prosecutors Management Information Systems) software to build this database. The software has a rather colorful past. “The PROMIS software was created by INSLAW Inc., a company owned by a former NSA intelligence officer named William Hamilton,” writes Ed Encho.

The software was modified for espionage purposes to include a ‘back door’ that could be used for spying on those that it was sold to… It is important to keep in mind the period when PROMIS was stolen in the early 1980’s and the fact that the technology boom was still years in the future which should give one an idea to just how far advanced and therefore how important that it was to those who would use it in order to promote a sinister agenda.

Designed as case-management software for federal prosecutors, PROMIS has the ability to combine disparate databases, and to track people by their involvement with the legal system. Hamilton and others now claim that the DOJ has modified PROMIS to monitor intelligence operations, agents and targets, instead of legal cases.

North’s “sinister agenda,” in addition to covertly working with the Nicaraguan Contras to overthrow the Sandinista government, included Rex-84, a classified plan to round-up and intern political dissidents. This was exposed by the Miami Herald in 1987.

During the hearings on Iran-Contra in 1987, then Rep. Jack Brooks questioned North directly on Rex-84.

[Congressman Jack] Brooks: Colonel North, in your work at the N.S.C. were you not assigned, at one time, to work on plans for the continuity of government in the event of a major disaster?

[Senator Daniel] Inouye: I believe that question touches upon a highly sensitive and classified area so may I request that you not touch upon that?

Brooks: I was particularly concerned, Mr. Chairman, because I read in Miami papers, and several others, that there had been a plan developed, by that same agency, a contingency plan in the event of emergency, that would suspend the American constitution. And I was deeply concerned about it and wondered if that was an area in which he had worked. I believe that it was and I wanted to get his confirmation.

Inouye: May I most respectfully request that that matter not be touched upon at this stage. If we wish to get into this, I’m certain arrangements can be made for an executive session.

The “highly sensitive and classified” plan to identify and target political activists is not a new or innovative concept. It began in earnest with the FBI’s cross-referenced “ADEX” list in the 1960s.

The FBI, then known as the General Intelligence Division (GID), began indexing names shortly after the First World War. The “reserve Index” of this voluminous list (more than 10 million people were indexed by 1939) set aside people who would be “arrested and held” in case of a national emergency. The system was tweaked with the “Custodial Detention List” (also known as the “Alien Enemy Control” list) used to round-up Japanese-Americans during the Second World War.

Since that time, the government has combined its numerous lists of potential detainees and whittled it down slightly to eight million people. The revised list is codenamed Main Core. The government has added names to this list since the 1980s when North was plotting his Continuity of Government plan to suspend the Constitution.

There exists a database of Americans, who, often for the slightest and most trivial reason, are considered unfriendly, and who, in a time of panic, might be incarcerated. The database can identify and locate perceived ‘enemies of the state’ almost instantaneously.” He and other sources tell Radar that the database is sometimes referred to by the code name Main Core. One knowledgeable source claims that 8 million Americans are now listed in Main Core as potentially suspect. In the event of a national emergency, these people could be subject to everything from heightened surveillance and tracking to direct questioning and possibly even detention.

Whitney Webb has done an exemplary job of connecting the dots on the Epstein case. She painstakingly links the efforts of US and Israeli intelligence to track and target political activists (in the case of Israel, Palestinians).

Israel, like the CIA, has spent a lot of time and money underwriting tech startups. The objective is to create a surveillance system focused on “pre-crime,” that is to say using social media, the internet, email, cellphone tracking, and other data to form a profile of potential enemies of the state and their political behavior—for instance, organizing a boycott of Israel or revealing the manifest crimes of the United States government.

Israeli and US tech companies, Webb writes, are “marketing themselves as ‘technological’ solutions to mass shootings while also doubling as covert tools for mass data collection and extraction, the end result is a massive surveillance system so complete and so dystopian that even George Orwell himself could not have predicted it.”

Following another catastrophic mass shooting or crisis event, aggressive efforts will likely follow to foist these “solutions” on a frightened American public by the very network connected, not only to Jeffrey Epstein, but to a litany of crimes and a frightening history of plans to crush internal dissent and would-be dissenters in the United States.

Kurt Nimmo has blogged on political issues since 2002. In 2008, he worked as lead editor and writer at Infowars, and is currently a content producer for Newsbud. His book Another Day In The Empire is available from Amazon.
(Visited 1 times, 1 visits today)
Share
Tweet
Share
Pin