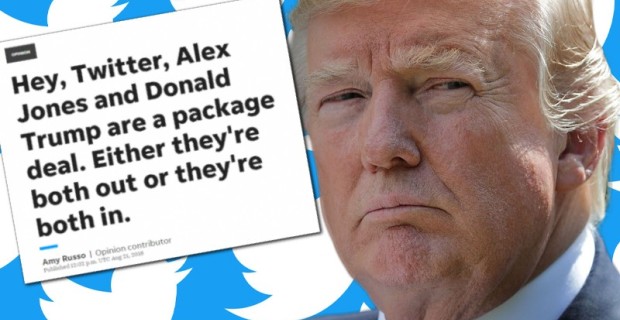 A USA Today opinion writer has called on Twitter to ban President Trump because Trump was mean to CNN.

In an article entitled Hey, Twitter, Alex Jones and Donald Trump are a package deal. Either they’re both out or they’re both in, Amy Russo says that Twitter should have gone further than merely suspending Alex Jones for 7 days given that Jones was rude to CNN’s Brian Stelter, which she asserts is “targeted harassment”.

Apparently, Russo doesn’t think that CNN’s six month campaign, led by Stelter and his colleague Oliver Darcy, to lobby big tech to ban Jones off the Internet was an example of “targeted harassment”.

Russo then actually proceeds to make the argument that Trump should be banned by Twitter because he was mean to CNN as well as being unfriendly towards Iran’s dictatorial theocracy.

“If we hold bad actors like Jones to those standards, why aren’t we doing so with our president?” she asks.

“Last year, Trump sparked outrage with an edited video appearing to show him clobbering an individual meant to represent CNN in a violent outburst. Last month, he delivered an unhinged all caps threat to Iran, cautioning that it would suffer for its war of words,” writes Russo, adding that Trump calling former aide Omarosa Manigault Newman a “dog” and Sen. Richard Blumenthal, D-Conn., a “loser” is also grounds for a ban.

She concludes by admitting that bans don’t even really work and that the targeting of Alex Jones has “just made him a martyr for those who support him.”

Infowars has been banned by Facebook. Please help us by sharing this article on your own Facebook page.