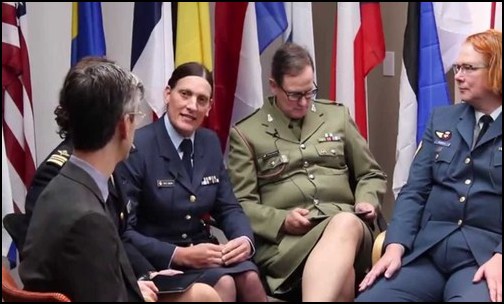 That means we taxpayers will have to pay for the surgeries that don’t actually re-assign a person’s gender. That’s because a person’s gender is determined by DNA chromosomes that remain the same after all the torturous body mutilations — chopping off breasts, shaving off the Adam’s apple, castrating the penis and testicles, gouging a hole as a pretend-vagina that must be “dilated” until the wound eventually scars over. See:

Below is a video showing the butchering that claims to be male-to-female gender-reassignment surgery:

Here’s the letter from the vice president of Family Research Council:

The Department of Veterans Affairs (VA) is considering changing its medical benefits package to begin covering sex-reassignment surgery – an elective surgery on the healthy organs of healthy individuals. They have requested comments on this change and we urge you to speak out on behalf of veterans.

The VA has noted that “any addition to the medical benefits package will have an associated cost and burden on existing specialists, especially urological and vascular surgeons and other highly trained specialists who are already in short supply nationwide.”

Limited resources and funds should be allocated based on medical need and, after analyzing numerous studies, the Centers for Medicare and Medicaid Services has refused to label sex-reassignment surgery as medically necessary.

In 2014, the American people were shocked to learn that thousands of patient records at numerous VA facilities across the country were fraudulently maintained to cover-up backlogs that resulted in veterans dying before they received care. A March 2018 Inspector General investigation found that this problem has not been fully resolved. More than 5,000 patient records across 64 facilities were found to be incorrectly dated, thus masking the length of time these veterans had been waiting for care. Also, many patients with accurately dated records were not given the opportunity to seek care outside the VA system – an option to which they are legally entitled after waiting the prescribed 30-day period.