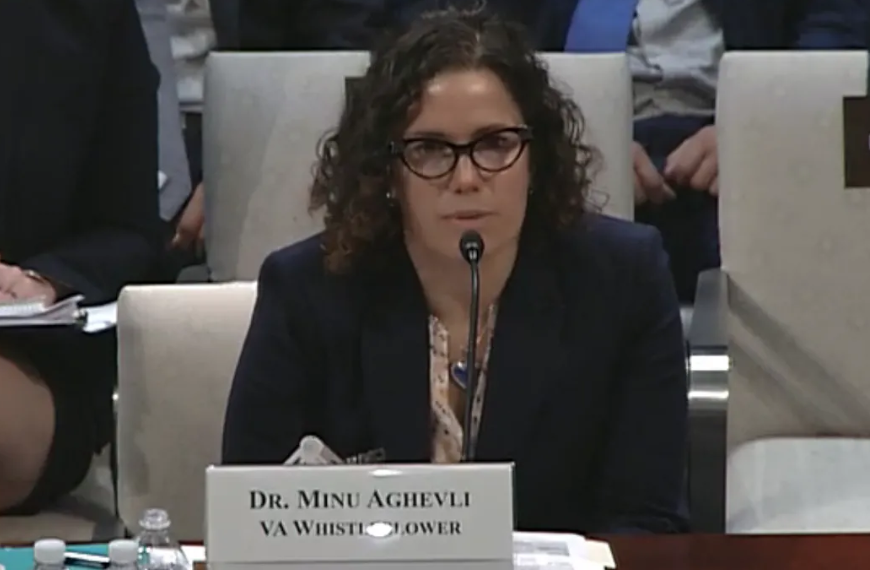 One day before Minu Aghevli testified at a House committee hearing about official Department of Veterans Affairs misconduct, she received a thick packet of documents that shook her life.

It amounted to a pink slip more than 170 pages long, including about 140 pages outlining reasons VA plans to fire her, according to Kevin Owen, her lawyer. The packet arrived on Monday. She testified on Tuesday.

Aghevli, 42, is a District native who has spent her entire 20-year career with VA. She is a clinical psychologist with a department opioid treatment program in Baltimore.

But the moniker that matters now for her is VA whistleblower. Aghevli has made disclosures that she said led department officials to dismiss her, despite her Gold VA Pins for excellent customer service.

Aghevli’s allegations are serious. They include phony-wait-list assertions of the type that have bedeviled VA since it was consumed by a scandal that broke in 2014. She also accused department officials of lying to Congress.

“In order to reduce the wait list, I was instructed to improperly remove veterans from the electronic wait list by scheduling fake appointments for them in an imaginary clinic,” she told the House Veterans Affairs subcommittee on oversight and investigations.

“This clinic was not tied to any provider or location, nor did it actually correspond to any real visits. . . . The veterans scheduled for these fictitious appointments were not actually receiving VA care.” Aghevli said she protested and did not do as instructed.

Other actions to seemingly reduce the number of veterans awaiting care, she said, included coding indigent patients as “care no longer needed” without confirming that.

When lawmakers demanded information about VA wait lists in September 2015, she said, “the VA deliberately sent these incorrect numbers to Congress.”

The Office of Special Counsel has moved to block Aghevli’ s firing while it reviews her case. This special counsel protects federal whistleblowers and is not related a better-known special counsel, Robert S. Mueller III, who led a probe into Russia’s interference in the 2016 elections.

Only whistleblowers and their advocates testified at the hearing. Pappas said VA officials would be invited to a later session.