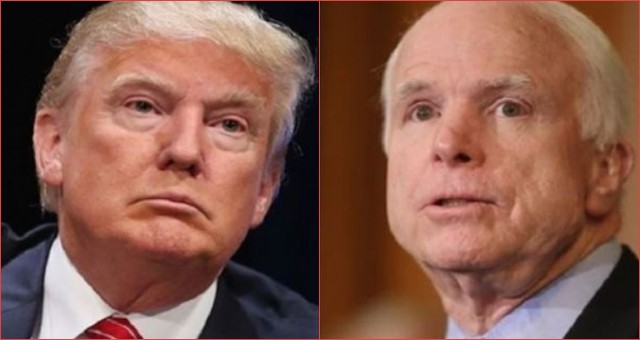 Many conservatives have been furious at the late Sen. John McCain since he gave his no vote on repealing Obamacare.

That was a knife to the heart of many Republicans that wanted to see the albatross of Obamacare gone.

But many have also speculated that the late senator and war hero was also involved in facilitating the Steele Dossier and that has now been confirmed.

The Steele Dossier, the majority of which is unverified, was the trigger that started the entire Russian collusion witch hunt and the investigation of Special Counsel Robert Mueller.

Steele was an informant for the FBI but the FBI fired the unreliable Steele. Yet somehow the FBI continued to get information from Steele after it fired him.

It was unknown how they got his reports until the report of Inspector General Michael Horowitz was issued and it was discovered on Thursday by Breitbart News.

“There have long been questions about why it was necessary for McCain to pass Steele’s anti-Trump dossier to Comey on December 9, 2016, several weeks after the November 2016 presidential election. By then, Steele had already met numerous times with FBI agents to provide them with his controversial reports.

“Steele, however, was terminated as an FBI source in the fall of 2016 because he spoke to the news media,” it said.

“The IG report discloses that McCain gave five new Steele reports to Comey that the FBI did not previously possess, showing that McCain served as a conduit for Steele’s information to reach the FBI even after the British ex-spy was formally cut off as an FBI source,” it said.

Whether the late senator knew that Steele had been fired by the FBI is not known but the Inspector General did know what Sen. McCain did.

“Several weeks later, on December 9, 2016, Senator John McCain provided Comey with a collection of 16 Steele election reports, 5 of which Steele had not given the FBI,” the report said.

The McCain staff member has been said to be David J. Kramer who gave the Dossier to Buzzfeed News, who published the unverified dossier.

The late senator had admitted before his death that he did provide the FBI with the dossier but never said why he did it.

In the book he published prior to his death Sen. McCain defended his decision to give the dossier to the FBI, saying it was his obligation.

“Anyone who doesn’t like it can go to hell,” he said in the book.