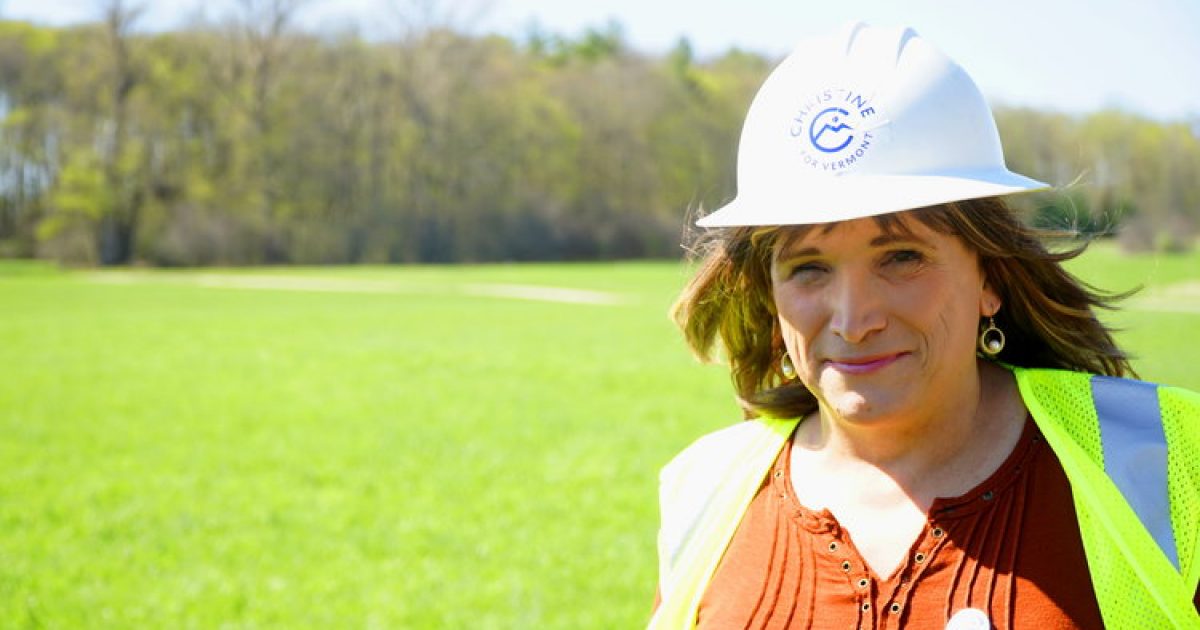 I cannot understand how anyone could take such a person serious, let alone be able to sit and listen to this person debate and campaign for votes to put them in the most powerful position in the state. Yet, in the state that brought us Socialist Senator Bernie Sanders, the Democratic Party has a transgender man who has claimed the party’s nomination for governor.

If you think I’m being somehow mean, just look and listen to this.

Today, Christine Hallquist is hoping to become the Democratic nominee for Governor of Vermont.

If she wins, she could become America’s first transgender Governor in November pic.twitter.com/FzECz7ADjI

A former Vermont utility executive on Tuesday became the first transgender candidate from a major political party to be nominated for governor, and she’ll face the Republican incumbent, who survived a bitter backlash from his base over gun restrictions he supported.

GOP Gov. Phil Scott defeated a challenge from Springfield businessman Keith Stern in his quest to win a second term. He will face Christine Hallquist, who won the Democratic primary to run for the state’s highest office in November, when she would become the nation’s first transgender governor if elected.

Scott said he expected the race to be closer than it was.

What’s amazing is all the people referring to this man as a “woman” and “she.”

Take a look at these tweets.

Congratulations to @christineforvt for her Democratic primary win for Governor of Vermont tonight. Let's continue making history and win this November!

Incredible and groundbreaking victory. Congratulations @christineforvt & shout out to Vermont voters for continuing VT’s legacy of courageous inclusion & advocacy for all people. https://t.co/7NUz5ffNZ4

Considering that every single one of these people are Socialists, it’s kind of amazing that Hallquist claims to have no idea what Socialism is Furthermore, what makes Hallquist a woman? Nothing. Just because he may “feel” like one and want to dress like one, doesn’t make him a woman. He can take hormones and mutilate his body, but he’s still gonna be a man at the DNA level. So, I’ll refer to him as a man, albeit an effeminate one.

The Boston Globe reports on Hallquist’s family and “coming out.”

Hallquist came out as transgender while collaborating with her son on a film project about her climate change advocacy entitled “Denial.”

“While in the process of filming Denial in 2015, Christine made the decision, after years of holding it inside, to come out as her true self, a transgender woman, becoming the first business leader in the country to transition while in office,” the campaign site says.

Hallquist has “three wonderful children and two grandchildren,” her site says. “Working to ensure that Vermont remains the special, inclusive and progressive place that it has always been, not only for her children and grandchildren, but also for future generations of Vermonters, is what motivates Christine to seek the honor and opportunity to serve the people of Vermont as its next governor.”

Honestly, that is one of the saddest stories I’ve read. I truly feel for his children and that example he is setting before them. Someone should have loved him enough to tell him he was wrong and seek to lovingly correct him, but no one did, not even the church he attends.

But that’s not all, Hallquist’s site tells us of his previous work in his community.

“She has served as Hyde Park Town Meeting Day Moderator for the past five years, served twelve years on the Lamoille Economic Development Corporation Board, chaired the Sterling Area Services Mental Health Board, and served on the Hyde Park School Board. She is a member of United Community Church in Morrisville.”

Obviously, his church doesn’t love him enough to correct his behavior, but even more telling is this man was allowed on a school board and a mental health board. Talk about irony!

What’s going to come out of Vermont next, someone who openly practices bestiality or pedophilia? And before you blow me off, consider what they’ve turned out so far.