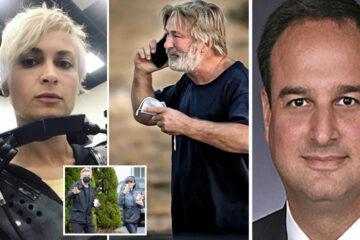 In September, an attorney with ties to the Democratic National Committee and 2016 Democratic presidential nominee Hillary Clinton was been charged with lying to the FBI. Now, we’re discovering that Halyna Hutchins, the woman shot and killed by Alec Baldwin during filming of the movie “Rust,” was the wife of an attorney that’s representing Michael Sussman, who is the attorney that was indicted for lying to the FBI.

Matt Couch has the story at The DC Patriot.

Just when you thought this entire story couldn’t get any weirder, it’s now came to light that the woman that Alec Baldwin accidentally shot and killed is the wife of an attorney who works for the firm that’s representing Michael Sussmann. The same Michael Sussmann that was just indicted by John Durham.

The husband of Halyna Hutchins, the cinematographer who was fatally shot by actor and producer Alec Baldwin with a loaded gun (supposed to be a prop gun, but it wasn’t) on Thursday, is a corporate lawyer in Latham & Watkins Los Angeles office.

Matt Hutchins joined Latham as an associate this year. Earlier he was an in house lawyer at an entertainment company and practiced at Kirkland & Ellis and Skadden, Arps, Slate, Meagher, & Floam, according to his LinkedIn profile.

Hutchins told news outlets on Friday that he had spoken with Baldwin and said the actor was supportive. Hutchins could not be reached for comment. A Latham spokesperson declined to comment as well.

Halyna Hutchins was killed when Baldwin discharged a prop firearm on the set of his Western movie “Rust” in New Mexico. The Santa Fe Sheriff’s Department said it is investigating the incident, which also left the film’s director, Joel Souza, injured.

Clearly, it wasn’t a prop gun as it had live ammo in it, but I digress.

We previously reported on Sussman’s indictment in September.

A federal grand jury returned a single felony count of making a false statement to the FBI against Michael Sussmann, a Washington attorney.

The indictment said Mr. Sussmann falsely claimed he was not representing a client when he peddled allegations to the FBI that the Trump Organization was secretly communicating with Russia‘s Alfa Bank.

Prosecutors said Mr. Sussmann in fact represented Mrs. Clinton’s 2016 presidential campaign and an unnamed tech executive when he spoke with the FBI.

Mr. Sussmann‘s attorneys said their client never made such a statement. They also said there was no evidence the alleged false statement affected the FBI‘s handling of the Russia collusion probe.

“Mr. Sussmann has committed no crime,” they said in a statement.

Mr. Sussmann, a partner at the Perkins Coie law firm, represented the DNC when Russia hacked its servers in 2016.

During the meeting with Mr. Baker, Mr. Sussmann relayed data and analysis from a cybersecurity researcher who claimed that odd internet data was evidence of secret communications between the Trump Organization and Alfa, according to the indictment.

Mr. Baker told investigators he recalled Mr. Sussmann telling him that the meeting was not on the behalf of a client. Mr. Sussmann later testified to Congress in December 2017 that he met with the FBI on behalf of the cybersecurity expert.

Is anyone else wondering if there is more here than meets the eye?