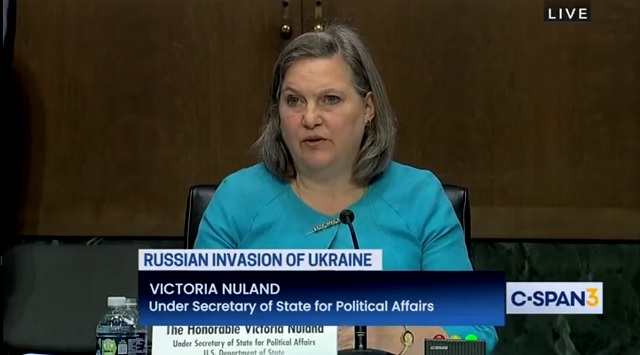 Ukraine has "biological research facilities," says Undersecretary of State Victoria Nuland, when asked by Sen Rubio if Ukraine has biological or chemical weapons, and says she's worried Russia may get them. But she says she's 100% sure if there's a biological attack, it's Russia. pic.twitter.com/uo3dHDMfAS

Really good cleanup by Rubio: interrupting Nuland's bizarre confession, which he did not expect, and immediately directing her to say that if there's a biological attack, it must be Russia.

Why is she so concerned Russia would seize such a benign "biological research facility"?

Self-anointed “fact-checkers” in the U.S. corporate press have spent two weeks mocking as disinformation and a false conspiracy theory the claim that Ukraine has biological weapons labs, either alone or with U.S. support. They never presented any evidence for their ruling — how could they possibly know? and how could they prove the negative? — but nonetheless they invoked their characteristically authoritative, above-it-all tone of self-assurance and self-arrogated right to decree the truth and label such claims false.

Claims that Ukraine currently maintains dangerous biological weapons labs came from Russia as well as China. The Chinese Foreign Ministry this month claimed: “The US has 336 labs in 30 countries under its control, including 26 in Ukraine alone.” The Russian Foreign Ministry asserted that “Russia obtained documents proving that Ukrainian biological laboratories located near Russian borders worked on development of components of biological weapons.” Such assertions deserve the same level of skepticism as U.S. denials: namely, none of it should be believed to be true or false absent evidence. Yet U.S. fact-checkers dutifully and reflexively sided with the U.S. Government to declare such claims “disinformation” and to mock them as QAnon conspiracy theories.

Unfortunately for this propaganda racket masquerading as neutral and high-minded fact-checking, the neocon official long in charge of U.S. policy in Ukraine testified on Monday before the Senate Foreign Relations Committee and strongly suggested that such claims are, at least in part, true. Yesterday afternoon, Under Secretary of State Victoria Nuland testified before the Senate Foreign Relations Committee. Sen. Marco Rubio (R-FL), hoping to debunk growing claims that there are chemical weapons labs in Ukraine, smugly asked Nuland: “Does Ukraine have chemical or biological weapons?”

Rubio undoubtedly expected a flat denial by Nuland, thus providing further “proof” that such speculation is dastardly Fake News emanating from the Kremlin, the CCP and QAnon. Instead, Nuland did something completely uncharacteristic for her, for neocons, and for senior U.S. foreign policy officials: for some reason, she told a version of the truth. Her answer visibly stunned Rubio, who — as soon as he realized the damage she was doing to the U.S. messaging campaign by telling the truth — interrupted her and demanded that she instead affirm that if a biological attack were to occur, everyone should be “100% sure” that it was Russia who did it. Grateful for the life raft, Nuland told Rubio he was right.

But Rubio’s clean-up act came too late. When asked whether Ukraine possesses “chemical or biological weapons,” Nuland did not deny this: at all. She instead — with palpable pen-twirling discomfort and in halting speech, a glaring contrast to her normally cocky style of speaking in obfuscatory State Department officialese — acknowledged: “uh, Ukraine has, uh, biological research facilities.” Any hope to depict such “facilities” as benign or banal was immediately destroyed by the warning she quickly added: “we are now in fact quite concerned that Russian troops, Russian forces, may be seeking to, uh, gain control of [those labs], so we are working with the Ukrainiahhhns [sic] on how they can prevent any of those research materials from falling into the hands of Russian forces should they approach” — [interruption by Sen. Rubio]:

Nuland’s bizarre admission that “Ukraine has biological research facilities” that are dangerous enough to warrant concern that they could fall into Russian hands ironically constituted more decisive evidence of the existence of such programs in Ukraine than what was offered in that same Senate in 2002 and 2003 to corroborate U.S. allegations about Saddam’s chemical and biological programs in Iraq. An actual against-interest confession from a top U.S. official under oath is clearly more significant than Colin Powell’s holding up some test tube with an unknown substance inside while he points to grainy satellite images that nobody can decipher.

It should go without saying that the existence of a Ukrainian biological “research” program does not justify an invasion by Russia, let alone an attack as comprehensive and devastating as the one unfolding: no more than the existence of a similar biological program under Saddam would have rendered the 2003 U.S. invasion of Iraq justifiable. But Nuland’s confession does shed critical light on several important issues and raises vital questions that deserve answers.

I think it should go without saying that if Ukraine is developing biological/chemical weapons in secret and openly threatening to acquire nuclear weapons that would justify Russia taking defensive actions.

Any attempt to claim that Ukraine’s biological facilities are just benign and standard medical labs is negated by Nuland’s explicitly grave concern that “Russian forces, may be seeking to gain control of” those facilities and that the U.S. Government therefore is, right this minute, “working with the Ukrainians on how they can prevent any of those research materials from falling into the hands of Russian forces.” Russia has its own advanced medical labs. After all, it was one of the first countries to develop a COVID vaccine, one which Lancet, on February 1, 2021, pronounced was ” safe and effective” (even though U.S. officials pressured multiple countries, including Brazil, not to accept any Russian vaccine, while U.S. allies such as Australia refused for a full year to recognize the Russian COVID vaccine for purposes of its vaccine mandate). The only reason to be “quite concerned” about these “biological research facilities” falling into Russian hands is if they contain sophisticated materials that Russian scientists have not yet developed on their own and which could be used for nefarious purposes — i.e., either advanced biological weapons or dual-use “research” that has the potential to be weaponized.

What is in those Ukrainian biological labs that make them so worrisome and dangerous? And has Ukraine, not exactly known for being a great power with advanced biological research, had the assistance of any other countries in developing those dangerous substances? Is American assistance confined to what Nuland described at the hearing — “working with the Ukrainians on how they can prevent any of those research materials from falling into the hands of Russian forces” — or did the U.S. assistance extend to the construction and development of the “biological research facilities” themselves?

For all the dismissive language used over the last two weeks by self-described “fact-checkers,” it is confirmed that the U.S. has worked with Ukraine, as recently as last year, in the “development of a bio-risk management culture; international research partnerships; and partner capacity for enhanced bio-security, bio-safety, and bio-surveillance measures.” The U.S. Embassy in Ukraine publicly boasted of its collaborative work with Ukraine “to consolidate and secure pathogens and toxins of security concern and to continue to ensure Ukraine can detect and report outbreaks caused by dangerous pathogens before they pose security or stability threats.”

This joint US/Ukraine biological research is, of course, described by the State Department in the most unthreatening way possible. But that again prompts the question of why the U.S. would be so gravely concerned about benign and common research falling into Russian hands. It also seems very odd, to put it mildly, that Nuland chose to acknowledge and describe the “facilities” in response to a clear, simple question from Sen. Rubio about whether Ukraine possesses chemical and biological weapons. If these labs are merely designed to find a cure for cancer or create safety measures against pathogens, why, in Nuland’s mind, would it have anything to do with a biological and chemical weapons program in Ukraine?

Both Russia and China have been calling out these biolabs:

"We have found your biological material. It was developed primarily for military purposes…it was all happening in Ukraine..What were you doing there under the guise of scientific research?..We have the evidence that cannot be refuted..we demand details"pic.twitter.com/GIvfAhwapN

The White House shifted into damage control mode this evening after Nuland’s blunder:

This is preposterous. It’s the kind of disinformation operation we’ve seen repeatedly from the Russians over the years in Ukraine and in other countries, which have been debunked, and an example of the types of false pretexts we have been warning the Russians would invent.

It’s Russia that has a long and well-documented track record of using chemical weapons, including in attempted assassinations and poisoning of Putin’s political enemies like Alexey Navalny.

Also, Russia has a track record of accusing the West of the very violations that Russia itself is perpetrating. In December, Russia falsely accused the U.S. of deploying contractors with chemical weapons in Ukraine.

Now that Russia has made these false claims, and China has seemingly endorsed this propaganda, we should all be on the lookout for Russia to possibly use chemical or biological weapons in Ukraine, or to create a false flag operation using them. It’s a clear pattern.