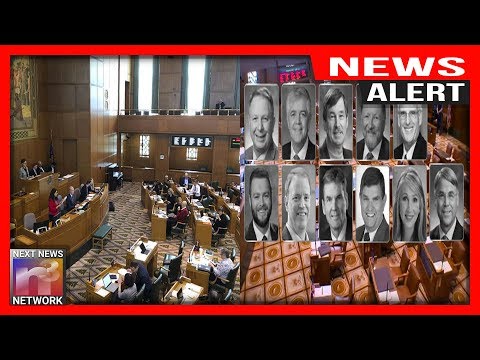 Next News Network is reporting that the brave Republican legislators, who went on the run to avoid a climate change vote, have apparently won.

Evidently Dems did not have enough votes to pass controversial House Bill 2020, and they were a bit uneasy when the militia stepped in.

Time will tell if the victory is lasting, but Republicans have definitely won this round.

For those who have not been paying attention, here is a bit of the backstory… in two articles.

Welcome to the wacky world of Oregon politics.

The Hill reported on Thursday that Oregon Gov. Kate Brown (D) authorized the state police to bring Republican lawmakers back to Salem after several left the state to avoid a vote on a climate bill.

GOP state senators walked out this week after voicing concerns over the bill’s impacts on a number of “energy intensive, trade-exposed” businesses in rural communities. Though the bill has already passed the House and Democrats hold a supermajority in the state Senate, Republicans have the numbers to deny a quorum in the upper chamber.

“The Senate Republicans have decided to abandon their duty to serve their constituents and walk out. The Senate Democrats have requested the assistance of the Oregon State Police to bring back their colleagues to finish the work they committed to push forward for Oregonians. As the executive of the agency, I am authorizing the State Police to fulfill the Senate Democrats’ request,” Brown said in a press release.

What does this remind you of?

When Washington Democrats were jet-setting all over the world to avoid negotiating with Trump on a budget, no one sent the cops after them.

Some 30 Democratic lawmakers left the government shutdown behind Friday on a chartered flight to Puerto Rico for a winter retreat with 109 lobbyists and corporate executives during which they planned to see the hit Broadway show “Hamilton” and attend three parties including one with the show’s cast.

Those attending the Congressional Hispanic Caucus BOLD PAC winter retreat in San Juan planned to meet with key officials to discuss the cleanup after Hurricane Maria at a roundtable Saturday.

Maybe Trump should have sent the feds after those Democrats?

Oregon Republican senators have left the Capitol and scattered in various directions outside the state in order to avoid being rounded up by troopers for a high-profile climate bill vote scheduled today.

“Protesting cap-and-trade by walking out today represents our constituency and exactly how we should be doing our job,” Senate Republican Leader Herman Baertschiger Jr., of Grants Pass, said in a written statement Thursday morning. “We have endured threats of arrest, fines, and pulling community project funds from the governor, Senate president and majority leader. We will not stand by and be bullied by the majority party any longer.”

Reached just after 7 a.m. Thursday, Sen. Cliff Bentz of Ontario said he was on his way out of the state. “In a few moments, I will not be in Oregon,” said Bentz, who spent most of Wednesday meeting with Gov. Kate Brown’s staff in an effort to negotiate changes to the carbon cap-and-trade plan, House Bill 2020.

Bentz said Republicans’ top concerns included that the bill would not do enough to protect dozens of “energy intensive, trade-exposed” businesses in Oregon, such as a cement plant in his district, from higher costs not imposed on the competition in other places such as China. Bentz said the negotiations ended around 8 p.m. Wednesday, when it became clear Democratic legislative leaders would not agree to changes sought by Senate Republicans.

As bizarre as this story may be, these Republicans had better be careful.

The last time Governor Kate Brown made national news by sending her troops out, LaVoy Finicum ended up dead.

The Oregon capital in Salem has been closed after alleged threats of violence by militia groups over Gov. Kate Brown’s (D) order to the Highway Patrol to find and return absent Republican senators who have left to deprive the chamber of a quorum over opposition to an economy-killing cap-and-trade bill.

The Wall Street Journal reports that the capital building was shuttered by law enforcement officials acting on tips that state militia groups could get violent over the showdown between the governor and the GOP senators.

“The State Police Superintendent just informed the Senate president of a credible threat from militia groups coming to the Capitol tomorrow,” read a text sent out to senators on Friday that was shared with The Wall Street Journal. “The Superintendent strongly recommends that no one come to the Capitol.”

Oregon State Police officials said they were continuing to monitor threats and would keep the capitol building closed indefinitely.

“The safety of legislators, staff and citizen visitors could be compromised if certain threatened behaviors were realized,” said Tim Fox, a captain with the Oregon state police.

He didn’t elaborate on the nature of the threats, which came as Republicans remained on the run outside the state, in an effort to block a bill that would limit greenhouse-gas emissions in Oregon.

The bill, HB 2020, would make Oregon the second state in the country to set up a cap-and-trade system for all sectors of the economy. California was the first, after passing a similar bill in 2016.

Democrats had scheduled a vote on the bill Thursday, but all 11 Republican senators fled the state. At least 20 senators must be present for a quorum, so Democrats need at least two Republicans present to hold a vote.

The current legislative session ends June 30. Republicans are hoping to run out the clock so that they can prevent the legislation from being voted on at all.

Fox News caught up with one of the absent GOP senators in neighboring Idaho over the weekend.

“We do our jobs best when we represent our constituents best,” said state Sen. Cliff Bentz. “And that means doing everything in our power to keep them from being irreparably damaged, which this bill will do.”

Rep. Karin Power is one of the Democrats behind the bill. She says the state is behind on its emission reduction goals and must take dramatic action to respond to climate change. …

Oregon would become the second state after California to adopt a cap-and-trade program, a market-based approach to lowering the greenhouse gas emissions behind global warming.

Under a cap-and-trade program, the state puts an overall limit on emissions and auctions off pollution permits or “allowances” for each ton of carbon industries plan to emit. Only the largest polluters are targeted.

Cap-and-trade isn’t new — it’s a Left-wing economic construct that stems from the unsubstantiated claim that humans are causing ‘climate change’ and thus human activities (such as industry, production, transportation, and technological development) must be curbed or altered to ‘save the planet.’

What is new, however, are the alleged threats from militia groups. This has the potential to get out of hand quickly if in fact they do show up at the capital and cause a showdown with law enforcement (and, eventually, National Guard troops).