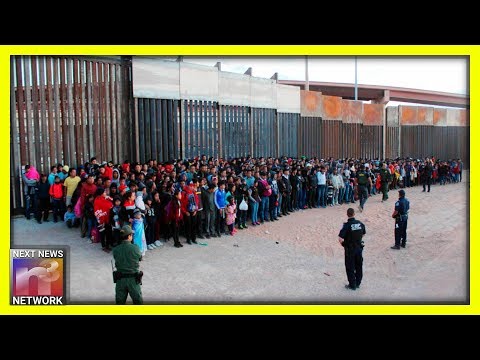 You have to see this video of a border brawl between Mexican police and African migrants.

As you watch the video please consider something.

Why in the heck are AFRICAN migrants trying to cross our Southern Border and how did they get to Mexico in the first place?

Here’s Gary with the footage:

These people have zero respect for authority.

The mainstream American media ignores the story of the African men who have been coming through South America to Mexico to try and reach the U.S. This is not immigration. This is an invasion because it’s all single men without women and children. The surge has been going on for longer than this latest increase in illegal immigration, and it’s fuelled by the message that our border is wide open.

The unbelievable video below of the Mexican military police literally fighting African migrants outside an immigration detention center in Tapachula, Mexico was released by Voice of America:

Military police officers clash with migrants from Africa, Haiti, and other countries during a protest in front of an immigration center in Tapachula, Mexico, demanding free transit through the country to reach the United States, Tuesday, August 27 H/T Conservative Treehouse

Another clearer video below:

How did they get to Mexico?

“Everyone’s goal is to come to the US” – Charlotte Cuthbertson

It’s amazing that our mainstream media doesn’t report on the real invasion from third world countries.

It has been reporters like Sydney Hernandez and Charlotte Cuthbertson (see video below) who are on the ground taking video and interviewing the illegals.

The illegals know they will get a pass into the U.S. if they claim asylum and especially if they have a child in tow.

How did they get to Mexico?

There is a Muslim invasion happening at our Southern Border, much like in Europe.

Being from an African nation does not make one a Muslim terrorist, but no one can truthfully deny that it increases the odds.

Many Muslims, already in America, are determined to bring Sharia Law and Muslim rule here.

The Southern Border crisis will either make or break America.

Bad people with bad intentions are crossing every day.

The good people need to do things legally and not associate themselves with the criminal elements crossing our border every single day.