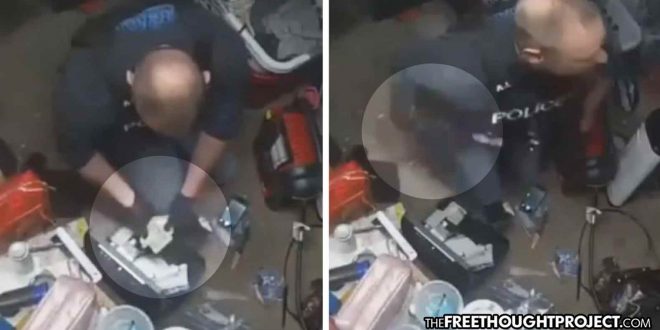 Bremerton, WA — A 15-year veteran special forces cop with the Bremerton Police Department was allowed to quietly resign this week amid allegations that he stole money during a drug raid in 2019. Despite clear video evidence of this cop committing a crime while on duty, Det. Jeffrey Inklebarger was not arrested and allowed to resign from the department before he was fired.

According to the report, Inklebarger was part of a team serving a search warrant over drug operation allegations at a home in February 2019. As this hero cop kept society “safe” from people voluntarily exchanging and ingesting substances, he was robbing them. His blatant theft was captured on multiple hidden cameras inside the home.

After watching the cop rob him, the homeowner brought the video to the attention of Bremerton Police officials last month through his attorney and an investigation was opened. According to the incident report:

After the incident, police themselves actually released the video in a show of transparency but they’ve yet to file any charges against this criminal cop. They have only released a statement claiming that this top cop stealing money on video doesn’t reflect the behavior of the rest of the department.

“We value the trust that the community has in the Bremerton Police Department and we will continue to work every day to earn and maintain that trust,” said Chief James Burchett. “Once we were made aware of the possible theft, we acted immediately. This was a betrayal of the oath of office and the law enforcement profession. Mr. Inklebarger’s actions do not reflect the values of the Bremerton Police Department nor are they representative of the ethical, hard working men and women of the Department.”

“The incident that occurred on the video does not represent the principles and practices of the City of Bremerton or our police department,” said Mayor Greg Wheeler. “The Bremerton Police have a reputation of being respectful, courteous and professional and are focused on maintaining the trust and confidence of the public. I am thoroughly behind our chief and police department and the values they uphold to serve our community at the highest level.”

If they want to maintain the trust of the public however, they need to hold this cop accountable. Quietly allowing him to resign before being fired is not holding him accountable at all. Had an average citizen been caught robbing someone’s home on video, rest assured they would have been arrested immediately. But because Inkelbarger was part of the system when he committed these crimes, he gets a pass.

The good news is that police are now investigating this cop’s past cases to see if other people have been robbed during drug raids carried out by this thief. According to the statement:

The Bremerton Police Department is currently conducting an investigation, with the assistance of the Kitsap County Prosecutor’s Office and the Bremerton Municipal Prosecutor’s Office, to identify current and past cases which may be impacted by Mr. Inklebarger’s actions. This is an in depth and lengthy process and we cannot comment further until the review is complete.

As you watch the video below, remember that prior to being caught stealing — which has likely happened many times before — this cop was considered a hero in his community. It is this blind trust in authority that allows corruption like this to flourish and will only come to a halt when the citizens refuse to be fleeced and demand accountability.

\Courtesy of The Free Thought Project