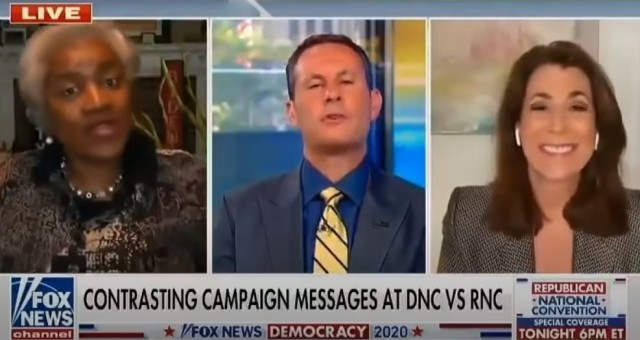 Why in the hell FOX News hired Donna Brazile, the lady that fed Hillary Clinton debate questions during the 2016 elections is beyond me.

But they did and we have the choice to watch something else when she comes on.

Let’s get to the meat of this article, shall we?

After Tammy Bruce described the clear difference in the two parties in America — DNC Convention focus on American sins versus RNC focus on hope, gratitude and growth — Donna Brazile LOST IT!

Brazile went straight to “400 years of slavery” after Tammy spoke of the Democrat Party refusal to condemn the young Democrats rioting and looting in the streets.

DAMN! So much anger!

What does “You do not recognize my existence” have to do with the discussion about the first night of the Republican convention?

Brazile a trying again to play the victim by pandering to the crowd that wants to continue being victims too.

Brazile recently told the RNC Chairwoman to “go to hell.”

Fox News should dump Brazile and while they are at it get rid of Juan Williams and Chris Wallace!