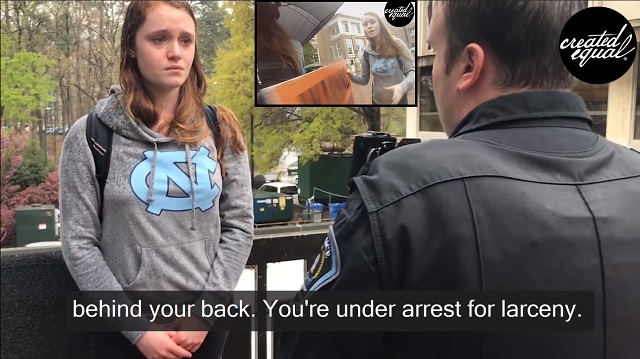 Hilarious video out of the University of North Carolina captured an empowered feminist boldly stealing a pro-lifer’s sign only to then seamlessly transition into a “damsel in distress” after being stopped by a police officer and told she’s under arrest.

The video was shared Tuesday on YouTube by the pro-life group Created Equal:

The woman pleaded with the officer when she realized that she was in serious trouble, complaining that the officers were protecting pro-lifers.

“Do you see us being subjected to this shit?” she said.

Again, the police officer took her to school, this time explaining the First Amendment.

After another plea about abortion access in North Carolina, she was finally arrested.

“I cannot believe this is happening,” she said, as though she was exempt from the law. “Is there something else I can do?”

“No,” the officer replied. “I just told you you’re under arrest. I cannot un-arrest you.”

According to Fox News, the incident happened in early April, just days after another member of the group was assaulted by an unhinged leftoid identified by Fox News as 19-year-old “pro-choice feminist and aspiring journalist” Jillian Ward.