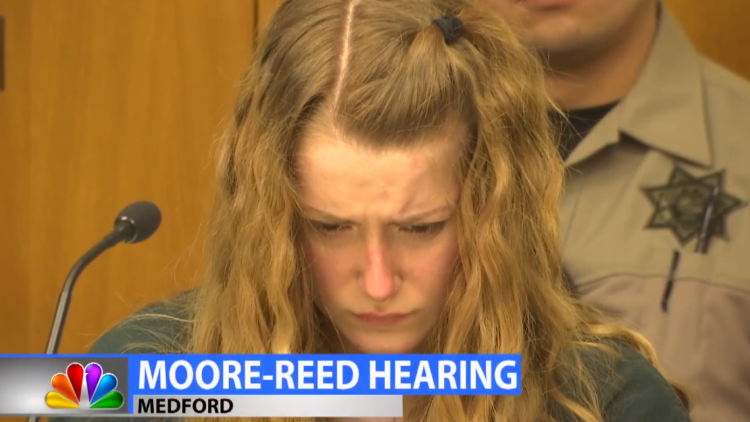 Aisling Tucker Moore-Reed is the usual SJW activist. There’s a privileged background, a book deal at 19, a trendy protest cause, and then… murder.

That last one is a little less typical. But here’s where it started.

Moore-Reed, or as she was calling herself back then, Tucker Reed, got famous when she jumped on the college rape protest bandwagon, some years after she had been supposedly raped at a party.

She wrote an article for Cosmo titled, “I Spoke Out About Being Raped and Sparked a Movement at My College.” It was accompanied by a photo of her, artfully coiffed in the way that ample wealth can assure, while a sign being held next to her reads, “Rape is rape, the details are irrelevant.”

She blogged for HuffPo and got briefly famous in lefty activist circles. In 2013, she received an award from the Veteran Feminists of America. (The only reason you might have heard of them is Borat.)

So, of course, Tucker-Reed made the inevitable transition to acting and then murder. Or the other way around.

A horror movie got a real-life plot twist when the lead actress was accused of shooting and killing her uncle and arrested for murder.

The woman, 30-year-old Aisling Tucker Moore-Reed, was cast as a lead role in the indie horror film “From the Dark,” shortly after being charged for manslaughter.

According to prosecutors, Moore-Reed shot and killed her uncle in Oregan in 2016. She was said to have recorded the crime on her cell phone.

Moore-Reed was originally charged with manslaughter and a year later, while out on bail, she auditioned for the film using the pseudonym “Wyn Reed.”

Reed is predictably claiming that she’s the victim. But her own video raises questions about that.

Reed and her mother, Kelly Moore, were at the house when Moore arrived.

In the video, Reed is alarmed at the sight of her uncle through French doors.

“He’s coming into the house goddammit,” she screams. “Get out!”

Less than 10 seconds later, there’s the sound of a gun being fired.

By then the video had become indecipherable, but the phone continued recording, picking up the sound of Reed becoming physically ill, wailing and sobbing in the bathroom.

It should be obvious by now that crybullies and SJWs are damaged people with serious issues. And that being around them isn’t healthy or safe. It’s a pity that campuses have become a safe space for them and an unsafe space for their victims.