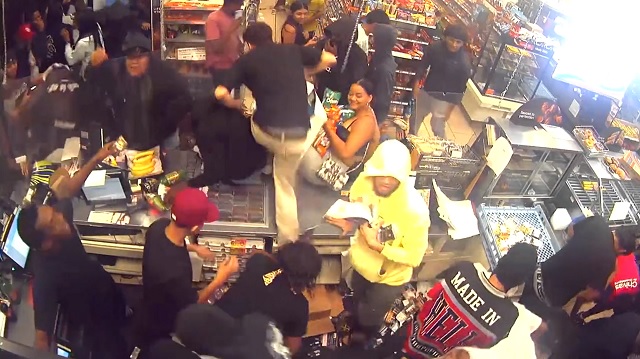 Newly released video shared by the Los Angeles Police Department shows a giant flash mob looting a 7-Eleven after holding a “street takeover” and “doing donuts” in the middle of an intersection.

On August 15 around 12:40am a street takeover initiated at Figueroa and El Segundo. The spectators then formed a ‘flash mob’ of looters and rushed a nearby 7-Eleven.

Detectives from the Los Angeles Police Department’s South Traffic and Southeast Divisions are investigating a street takeover that led to a ‘flash mob’ of looters.

On August 15, 2022, around 12:40 a.m., a street takeover initiated at the intersection of Figueroa Street and El Segundo Boulevard. Motorists flooded the intersection and blocked traffic with their vehicles from all directions to create a “pit” in the middle of the intersection. During the incident, spectators exited their vehicles and watched as motorists recklessly drove in a maneuver known as ‘doing donuts.’ The maneuver involves purposely losing tire traction while driving in a circular motion and continuing to accelerate. This results in a series of skid marks left on the pavement.

The spectators then formed a ‘flash mob’ of looters and rushed a nearby 7-Eleven located at the northwest corner of Figueroa Street and El Segundo Boulevard. Video surveillance from the store showed the looters fanning out across the store and grabbing all the snacks, drinks, cigarettes, lotto tickets, and other merchandise. Looters also vandalized the store and threw merchandise at employees. The looters then exited the store to the surrounding parking lots and streets, and quickly dispersed before police arrived.

The term ‘flash mob’ was first used to describe a large public gathering at which people perform an unusual or seemingly random act and then disperse, typically organized by means of the internet or social media. In the latest cases, however, ‘flash mobs’ have turned from fun spontaneous events to opportunistic criminal occurrences.

Officers obtained surveillance video of the looters to identify and the arrest the individuals involved.

Anyone with information about this traffic collision is asked to contact South Traffic Division Detectives at 323-421-2500 or email STDdetectives@lapd.online. During non-business hours or on weekends, calls should be directed to 1-877-LAPD-24-7 (877-527-3247). Anyone wishing to remain anonymous should call CrimeStoppers at 800-222-TIPS (800-222-8477). Tipsters may also contact CrimeStoppers by texting to phone number 274637 (C-R-I-M-E-S on most keypads) with a cell phone. All text messages should begin with the letters “LAPD.” Tipsters may also go to LAPDOnline.org, click on “webtips” and follow the prompts.