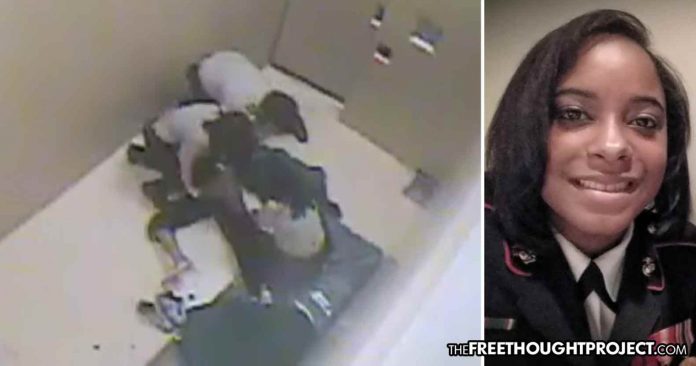 Chicago, IL — A disturbing video has been released as part of a lawsuit against the LaSalle County Sheriff’s office showing deputies throw an apparently innocent woman to the ground before stripping off all of her clothes. Zandrea Askew, a former sergeant in the Marine Corps says she was “humiliated, degraded and dehumanized” and the video backs her up.

The lawsuit was filed this week in federal court and it alleges false arrest, abuse, and horrifying treatment by deputies. According to the lawsuit, Askew was sitting in her parked car when two LaSalle County sheriff’s deputies stopped and questioned her. During the stop, deputies demanded that Askew undergo field sobriety tests, despite not committing any traffic violations or being involved in an accident.

The lawsuit claims that even though Askew passed the field sobriety tests, deputies arrested her anyway. According to Askey, she showed no signs of being drunk or under the influence of narcotics but was still charged with DUI. The suit accuses LaSalle County Sheriff Thomas Templeton and several deputies of false arrest, unlawful detention, excessive force, malicious prosecution, and violation of due process.

The sheriff’s office claims they found Askew parked in her car “very disoriented and confused.” Instead of asking her if she needed help, like a true public servant should do, they accused her of a crime—one she says she did not commit.

According to Askew, she pulled over her car because she was feeling ill and was on prescription medication at the time.

Police then thoroughly searched Askew before bringing her down to the jail for processing. The lawsuit states that despite being falsely arrested, Askew was cordial and listened to all of the deputies’ commands.

However, as the video shows, once Askew was in a jail cell, she was held down on the ground by deputies as they stripped the clothing from her body.

“Why do you need to take someone’s clothes off if they’re not cooperating with you?” attorney Terry Ekl said. “This was not a strip-search where they were looking for contraband. This was a form of punishment.”

Ekl also backed up Askew’s claims of being thoroughly searched on the road side and noted that there was no legitimate need to strip search her in the jail.

Askew’s attorney explains that the video shows his client was entirely compliant just before the deputies attacked her and began stripping off her clothes.

As CBS Chicago reports, Ekl said he has asked the U.S. Department of Justice to investigate the sheriff’s office regarding strip-searches.

What’s more, according to CBS Chicago, this county has already paid out hundreds of thousands of dollars for similar violations against multiple women.

Five years ago, LaSalle County paid out $355,000 to settle lawsuits filed by five other women who were strip searched. The department also promised better training.

Apparently, as the video below appears to illustrate, these deputies never got that training.

“Throughout her detention at the Jail, Plaintiff was not acting aggressively or engaging in any conduct that would cause an officer to be in reasonable apprehension of receiving bodily harm, or that justified the use of force against her,” the lawsuit states. “The only objective of the officers was to punish, harass, humiliate, degrade, and inflict physical and psychological pain.”

After this horrific treatment, all charges were dropped and Askew was released because deputies had no evidence of a crime.