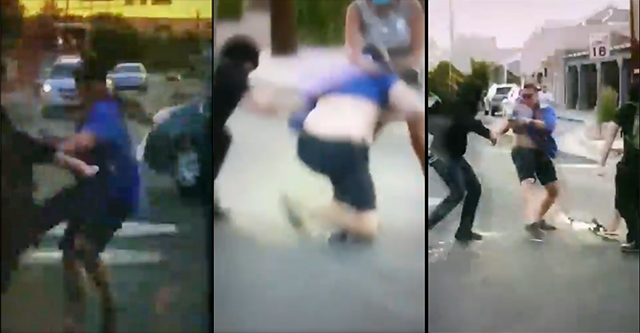 A violent mob of rioters tearing down a statue in Albuquerque, New Mexico on Monday were filmed chasing a man down in the streets and attacking him with fists and a skateboard only for the man to shoot one in self-defense.

The media and Twitterati were reporting the story as a “white supremacist” attack on “peaceful protesters” but their narrative collapsed after video surfaced showing the lynch mob chased the man down, pummeled him, threw him to the ground and bashed him with a skateboard.

The man only then fired back in self-defense.

We just obtained video of the shooting. pic.twitter.com/yjB6NHdKe2

Unconfirmed reports claimed the man was trying to protect the statue and could have been part of a patriot group called the New Mexico Civil Guard.

Democratic New Mexico Governor Michelle Grisham issued a statement after the above video had surfaced where she sided with the mob, convicted the patriot group without evidence or a trial, neglected to mention that the rioters were tearing down a statue and said she’s “praying” for the attacker and suggested it doesn’t matter who “strike[d] first.”

My statement on the “militia” and violence in Albuquerque tonight: pic.twitter.com/BZISvyau3k

Although we are still learning more about the situation, I am horrified and disgusted beyond words by the reports of violence at a protest Monday night in Albuquerque. The heavily armed individuals who flaunted themselves at the protest, calling themselves a “civil guard,” were there for one reason: To menace protesters, to present an unsanctioned show of unregulated force. To menace the people of New Mexico with weaponry – with an implicit threat of violence – is on its face unacceptable; that violence did indeed occur is unspeakable.

I am monitoring the situation; my administration is in touch with local officials; the individual who was injured is in my prayers, and I am thinking of their family and friends.

Let me clear: There is absolutely no space in New Mexico for any violent would-be ‘militia’ seeking to terrorize New Mexicans; and there is no space for violence of any kind on our streets and in our communities, or for any sort of escalation of reckless, violent rhetoric, no matter who strikes first. The instigators this evening will be rooted out, they will be investigated, and they will be held accountable to the fullest extent of the law. [Emphasis added]

UPDATE: Graphic video from a second angle which captured the shooting was released.