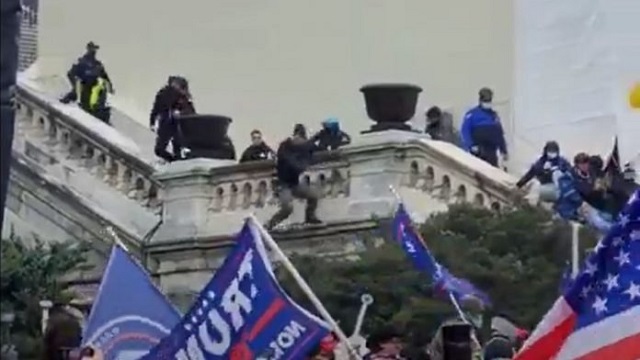 Police in Washington, DC were filmed shoving a pro-Trump protester off a high-up balcony at the Capitol building on Wednesday.

The video was shared by the Nationalist Review early Thursday.

Independent journalist Ford Fischer reported on Wednesday that a man was injured after having fallen “about 50 feet,” with witnesses claiming he was pushed by police.

One by gunshot, but no details on other three.

Earlier, I reported on a man who fell about 50 feet. I initially believed he must have survived, else the government would have told us.

The Nationalist Review is reporting this was the same incident. The man appears to have the same black shirt and green camouflage pants.

It’s not clear how large the fall actually was but the man did not appear to be moving.

DC police chief Robert J. Contee III admitting during a bizarre press conference that there were “three additional medical deaths” on top of Capitol police shooting Ashli Babbitt at point-blank — but refused to say how the three additional people died.

The way this press conference was conducted was not acceptable.

When pressed, says he can't answer.

It's ok to say what can't be released yet, but 4 died today, and that shouldn't be a side-note. https://t.co/SdZsnw5gIE

Was this man one of many killed at the hands of DC police?