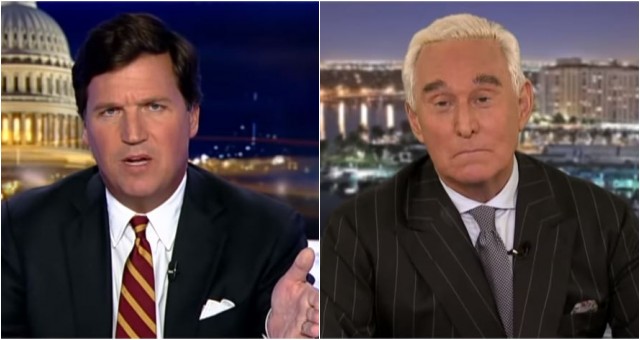 Two things are patently obvious in the federal government’s case against long-time GOP operative Roger Stone: 1) He’s going to be convicted of “lying to Congress,” and 2) he’ll spend the rest of his life in jail, without a pardon from President Trump.

Tucker Carlson make that very clear without really saying those words during his Wednesday evening program, as he ticked off one example after another about how the system is so stacked against Stone there’s no way he’s going to get a fair trial.

The biggest reason why is the federal judge overseeing the case: Obama appointee Amy Berman Jackson, who is blatantly biased against Stone and against President Trump to the point where she doesn’t even try to hide it.

Because she doesn’t have to. After all, she’s got a lifetime appointment to the federal bench — and when was the last time Congress impeached a federal judge for misconduct and bias?

From eye-rolling at Stone to approving jurors who have massive conflicts of interest and who have vocalized in her court how much they despise the president, it’s clear that Stone — a long-time political adviser to the president — will never get a fair trial.

Not in the deep blue haven of D.C., where the Garbage Party rules with an iron fist and no approval of the president is either permissible or tolerated.

So he’s going to be convicted of lying to Congress, Carlson noted with sarcasm, adding that lawmakers face no such legal jeopardy when they lie their tails off to the American people.

“What ought to be automatically disqualifying is Amy Berman Jackson’s behavior from the bench,” Carlson noted.

“No fair-minded person could condone it. If there were still honest liberals left in this country, they would be protesting outside the courtroom,” he added.