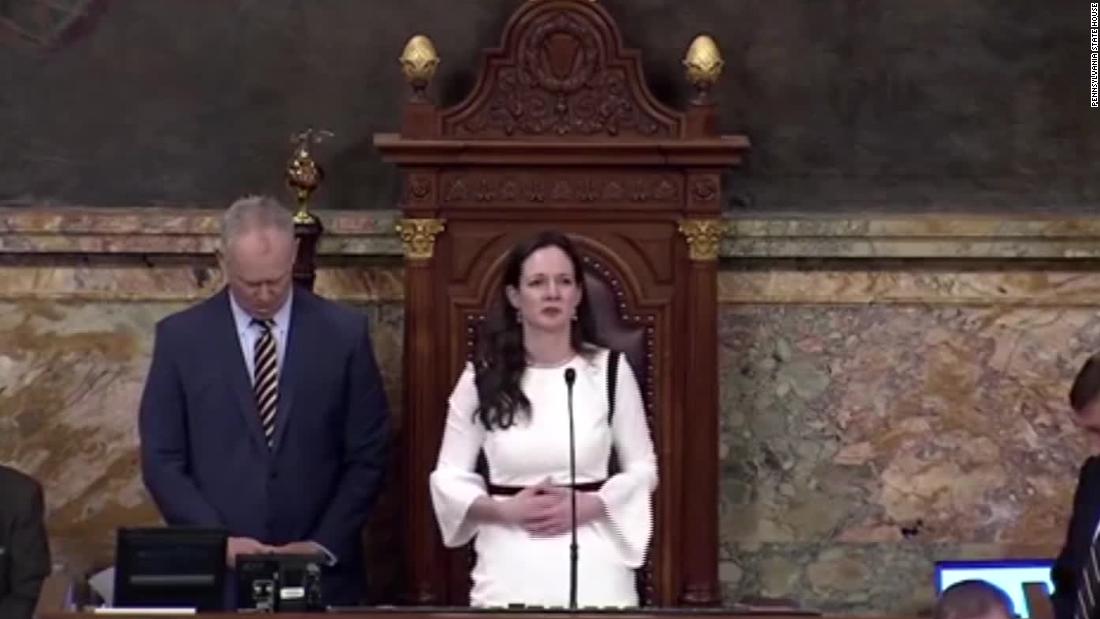 Islamic totalitarianism reared its ugly head this past week as an opening prayer of the Pennsylvania House of Representatives cause Democrats and Muslims, particularly the first Muslim woman to be sworn in to be offended and act completely inappropriately.

Rep. Movita Johnson-Harrell, D-Philadelphia, the first Muslim woman member of the House was to be sworn in on the same day the prayer occurred.

There is nothing controversial about the prayer for any red-blooded American. It is documented history that America is a Christian nation, though she has departed from her God.

One simple look to the first governing document establishing the people here was the Mayflower Compact and it was just as explicit as Ms. Borowicz’s prayer.

IN THE NAME OF GOD, AMEN. We, whose names are underwritten, the Loyal Subjects of our dread Sovereign Lord King James, by the Grace of God, of Great Britain, France, and Ireland, King, Defender of the Faith, &c. Having undertaken for the Glory of God, and Advancement of the Christian Faith, and the Honour of our King and Country, a Voyage to plant the first Colony in the northern Parts of Virginia; Do by these Presents, solemnly and mutually, in the Presence of God and one another, covenant and combine ourselves together into a civil Body Politick, for our better Ordering and Preservation, and Furtherance of the Ends aforesaid: And by Virtue hereof do enact, constitute, and frame, such just and equal Laws, Ordinances, Acts, Constitutions, and Officers, from time to time, as shall be thought most meet and convenient for the general Good of the Colony; unto which we promise all due Submission and Obedience. IN WITNESS whereof we have hereunto subscribed our names at Cape-Cod the eleventh of November, in the Reign of our Sovereign Lord King James, of England, France, and Ireland, the eighteenth, and of Scotland the fifty-fourth, Anno Domini; 1620.

“Jesus, you are our only hope,” Borowicz said, before going on to pray for the House Republican leaders, Gov. Tom Wolf, and President Trump.

She invoked the name of Jesus some 13 times during the prayer, exalting Him as “the King of Kings; the Lord of lords; the great I Am; the One who’s coming back again; the One who came, died and rose again on the third day.”

She also prayed for forgiveness for the nation’s sins and ended her prayer declaring, “At the name of Jesus, every knee will bow and every tongue will confess Jesus, that you are Lord.”

Of course, she took a position about modern-day Israel, which is unbiblical. Nevertheless, her prayer caused quite a controversy, something that would never have been a controversy just 20 years ago.

Johnson-Harrell, as well as other Democrats, denounced the prayer.

“I knew I was going to receive some discrimination because of my religion,” Johnson-Harrell said, according to WHYY radio in Philadelphia. “Because I’m a hijabi woman. And I am the first … but I did not think it would come on the actual day of my swearing-in.”

Johnson-Harrell said the prayer was “highly offensive to me, my guests, and other members of the House.”

“It blatantly represented the Islamophobia that exists among some leaders — leaders that are supposed to represent the people,” Johnson-Harrell said in a statement. “I came to the Capitol to help build bipartisanship and collaborations regardless of race or religion to enhance the quality of life for everyone in the Commonwealth.”

No, ma’am, that’s what Islam and totalitarians do and her comments are evidence of that.

“Let me be clear,” Harris said in a statement. “I am a Christian. I spend my Sunday mornings in church worshiping and being thankful for all that I have. But in no way does that mean I would flaunt my religion at those who worship differently than I do. There is no room in our Capitol building for actions such as this, and it’s incredibly disappointing that today’s opening prayer was so divisive.”

There’s her problem. She leaves her “religion” at the door of the church. She doesn’t actually practice any of it and you watch, this professed Christian, given enough time, will convert to antichrist Islam. She’s already openly denying Christ by blasting the prayer mentioning His name.

The Daily Caller noted an Islamic prayer called Takbir was recited before the legislature during Johnson-Harrell’s swearing-in.

The Islamic prayer ended, however, before its last line, which denounces the central Christian doctrine that Jesus is the Son of God.

But the state’s legislature applauded Muslim Democratic Pennsylvania State Rep. Jason Dawkins’ invocation Tuesday in which he recited from the Quran.

The reality is that if the Church would repent and start getting its doctrine and practice right, it would once again influence the politics of our land properly. Until God grants such repentance, we can expect to see the enemies of Christ and His Church rise to power to be used in judgment by God against His people (Deuteronomy 28).