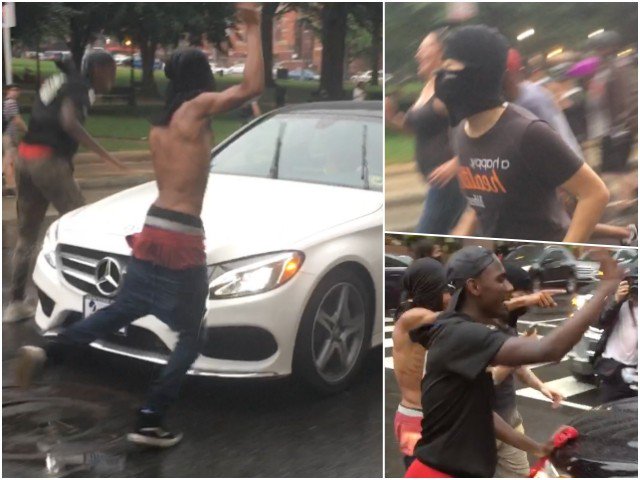 Video after video shows the “counter-protests” outside the “Unite the Right 2” rally in Washington DC on Sunday were in fact violent riots.

Black Lives Matter activists chased down and attacked random drivers in the streets and antifa goons attacked police and random Trump supporters who were protesting against both the “Unite the Right 2” rally and Antifa.

Black Lives Matter activists wearing ski masks attacked and threatened drivers in Washington, D.C. during a counter-protest against the “Unite the Right 2” protest in Lafayette Park.

In footage taken by Breitbart News, Black Lives Matter activists can be seen attacking cars and threatening drivers who were attempting to drive down the streets of Washington, D.C.

“Back up! Back the fuck up!” a group of Black Lives Matter activists shouted at a driver. “Go back that way n*gg*r!” Get your ass back!”

The car eventually began backing up due to the threats.

The actual “Unite the Right 2” rally garnered only around two or three dozen people, several of which were black and Hispanic:

The lead organizer, Jason Kessler, told the media before the event he views himself as a “civil rights advocate” for white people and told the media he was holding the event to show the world how not racist he is. He also said he only named the event “Unite the Right” so that people would “pay attention.”

Antifa and BLM activists rioted and attacked police as well as two random Trump supporters who were protesting the event:

A fairly large crowd of counterprotesters are gathered near the White House. “Fuck you” this person keeps yelling at officers. Many are angry at officers here for protecting the white nationalists and keeping the crowds separated. pic.twitter.com/jLYk4iiGz9

Counterprotesters are getting more rowdy because they’re boxed in and aren’t being let out. DC officers are feeling the blunt of this crowd’s frustrations. pic.twitter.com/9jeP0rP47Y

Whoa. This @DCPoliceDept officer was nearly mobbed by a group of counterprotesters at #UniteTheRight2. People were throwing things at him, shoving him and kicking his motorcycle. Looks like another cop was also in the mix, too. pic.twitter.com/IHoc5dvebW

Counterprotesters ignited a smoke flare in the crowd then threw it toward the Eisenhower building. pic.twitter.com/sR4JcMwGB1

Antifa carried a giant banner saying, “IT TAKES A BULLET TO BASH A FASH.”

“IT TAKES A BULLET TO BASH A FASH” pic.twitter.com/Jua8WRzJfj

Leftists at the rally told the Daily Caller’s Benny Johnson they would murder President Trump if they ever met him:

Antifa and BLM were filmed attacking female Trump supporter Suzanne Monk and another man who was at her side protesting both the “Unite the Right 2” event and Antifa:

A man and woman who were wearing Trump 2020 shirts and walking away from the #UniteTheRight2 rally, had water and some other chemical thrown on them. Counterprotesters followed them for blocks pic.twitter.com/SEI9r4h6vj

The man and woman wearing Trump shirts finally got to police. Counterprotesters pulled their hair, threw things at them and poured water on their heads. They’re now being escorted out of the area by police. #UniteTheRight2 pic.twitter.com/s3286TzPdg

It’s important to remember, as Mitt Romney reiterated in an attack on President Trump on Friday, these violent antifa lunatics are the good guys because they’re fighting against “hate.”

“There are no two sides!”

UPDATE: Another video has surfaced showing antifa whaling on a guy.