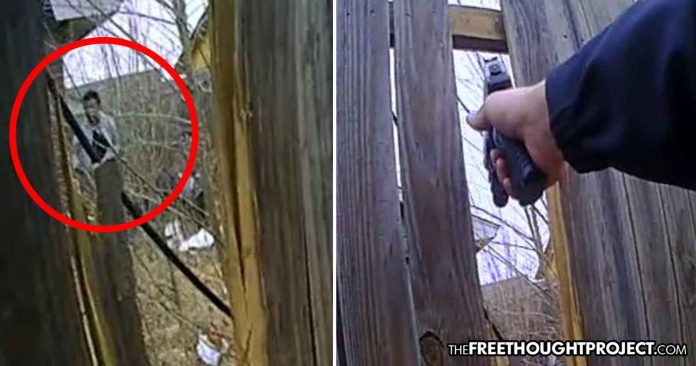 Oklahoma City, OK — Disturbing body camera footage was released this week showing how normal childhood acts can and will lead to children being shot by police. Boys being boys is apparently now a reason for deadly force in the land of the free.

“Everything happened so quick,” Cherelle Lee, Lorenzo’s mother told CNN. “There was no reason he should’ve fired off anyway just because he could’ve ended up taking his life.”

Despite body camera footage showing how fast the officer was to open fire on a child he knew was playing with a “cap gun,” and despite the lack of evidence that Lorenzo was even holding a toy gun when he was shot, Holcomb has returned to full duty after a brief paid vacation.

As the video shows, as the officer walks along the fence, faint pops are heard in the distance. Holcomb then gets on the radio, saying, “I think it’s a cap gun, but they are shooting something off.”

The fact that the kids were heard shooting the toy guns in the house proves they had no idea anyone had called police on them and no idea that police were there.

When Holcomb walks up to a portion of the fence that is missing boards, he points his gun through it for just a few seconds before opening fire.

“Show me your hands! Drop it!” Holcomb says and then immediately begins firing without allowing Lorenzo any time to respond. Lorenzo was shot twice.

Police said in a statement in March that “the suspect did not comply with the orders and Sergeant Holcomb discharged his firearm and struck the suspect.” However, the officer gave Lorenzo exactly 0 seconds to comply with any order.

When backup arrives, Holcomb tells another officer, “He’s the one that had a gun.”

That officer then asks the teen, “You had a gun?”

“I didn’t have a gun,” Lorenzo responds.

“Looks like just a flesh wound.” Another officer says, as Lorenzo lies face down in the grass with his hands cuffed behind his back, bleeding out. “Help me drag this guy.”

“My side,” Lorenzo says in pain as the officers probe him for bullet holes. “No, my other side. It’s, like, my hip,” he says of the bullet that entered his hip bone and exited through his buttocks.

As the video shows, Holcomb looks a the bullet wound and tells Lorenzo “you’re okay.”

It is not clear in the body camera footage whether or not Lorenzo had the toy gun. So, in this case it’s the officer’s word against the boy’s. Since there was a toy gun found nearby, police see this as a “good shoot.”

Naturally, the officer’s attorney and the department are backing the word of Holcomb and not the boy.

“I have not seen any information that shows anything other than the fact that the suspect was armed at the time he was fleeing the house after the police announced their presence,” the officer’s attorney Curt Dewberry said.

An attorney for Lorenzo, Dan Smolen, sees things differently. Smolen pointed out the fact that Holcomb is heard on the body camera footage, admitting that he knew the kids were playing with “cap guns,” yet he shot anyway.

Kids play with realistic toy guns all the time across this country, it’s why they are made. Most of them, however, are never shot.

“That officer heard what was being fired, acknowledged that it was a toy gun and still fired shots anyway,” Smolen said. “We know what his thoughts were just seconds before the shooting took place.”

Though Lorenzo denies having the toy gun, his mother noted that even if he did have it, Holcomb gave him no time to respond to the commands.

“Even if he had a BB gun,” Lee said, “you still have a protocol to sit there and ask him and command him to do what you need him to do, and once he’s not following that first command, then you take action on what you need to do from there.”

“It traumatizes me, myself, to understand that: Hey, you were this close from taking my baby’s life — for nothing,” she said.

Lorenzo said he never heard the police officers identify themselves and was simply being a boy playing with other boys when he was shot.

“By the time, I went out the window, I heard a voice say, ‘Freeze!’ and I jumped and looked to the right of me, and then he didn’t even give me no time to do anything — put my hands in the air, anything — and he just fired,” Lorenzo said.

In an interview with CNN, Lorenzo said that if he could talk to Holcomb, he’d tell him “that I’m actually a good kid, that I follow directions and stuff like that. He just didn’t give me time to follow his directions.”

Below is a video that shows what playing with your friends looks like in a police state.Spoiler alert—it can be deadly.