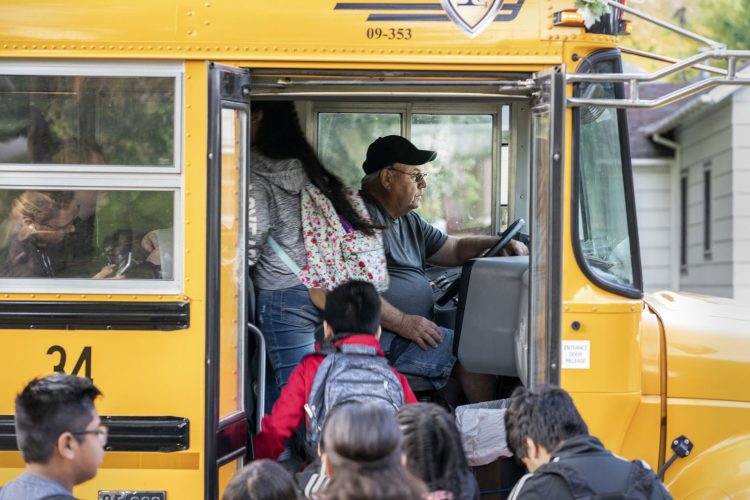 71-year-old Don Brink is a bus driver and a Vietnam veteran. However, while he stands opposed to illegal immigration simply because he is attempting to stand for the law, he continues to do his job, which includes driving some children who are in the US illegally. Yet, that didn’t stop the CIA-tied, Jeff Bezos-owned Washington Post from doing a bit of a hit piece on Brink.

The Washington Post’s Michael E. Miller files an overwrought character piece from a town overrun by illegal aliens, where the schools are struggling to accommodate the impossible numbers of trespassers, and decides to go after a 71-year-old Vietnam vet who makes ends meet by driving a bus.

It was the first day of school, so Don Brink was behind the wheel of his bus, its yellow paint glistening in the drizzling dawn. Wearing jeans and a John Deere cap, he turned the radio to an oldies station and, with hands callused thick by 50 years of farming, steered the vehicle toward the edge of town.

He stopped in front of familiar farmhouses surrounded by fields of soy and corn, where blond children boarded the bus, chatting in English.

Now, that’s not the end of the story. Miller goes on to write that as Brink made his way into what has become known as Little Mexico, he “resented” the area.

At the corner of Dover Street and Douglas Avenue, a handful of Hispanic children were waiting. At Milton Avenue, there were a few more. And at Omaha Avenue, a dozen students climbed aboard — none of them white.

“I say ‘good morning’ to the kids who’ll respond to me,” he said later. “But this year there are a lot of strange kids I’ve never seen before.”

Those children, some of whom crossed the U.S.-Mexico border alone, have fueled a bitter debate about immigration in Worthington, a community of 13,000 that has received more unaccompanied minors per capita than almost anywhere in the country, according to data from the Office of Refugee Resettlement (ORR).

Even as he earns a paycheck ferrying undocumented children to and from school, Brink opposes the immigration system that allowed them to come to Worthington.

“Those kids had no business leaving home in the first place,” Brink said. “That’s why we have all these food pantries, because of all these people we are supporting. I have to feed my own kids.”

Yet, his piece goes on to explain the overcrowding in the school and the fact that these kids simply aren’t learning English and that there aren’t enough teachers.

While I’ll grant that in many cases, the children don’t have much of a choice in how they got here. Some are trafficked in while others come with their parents.

Some of these were sexually abused, and still others were almost murdered in gangs or worse, left in the desert to die. Frankly, I do bear some sympathy towards some of the young children, but even in the report, a couple of teenage girls for Central America who were going to the school were pregnant.

Still, people want to paint people like Brink as racist.

Even as Worthington has changed, however, its tax base still depends largely on white farmers like Brink, pitting the town’s future against its past.

In 2013, when the school district first asked voters to pay for new classrooms amid the influx of unaccompanied minors, those farmers feared they would bear the brunt of the $39 million. The bond referendum failed.

“They shot for the moon,” said Dave Bosma, who transports livestock for a living. He voted for the referendum the first time around only to join Brink and others in opposing it in 2016. They called themselves Worthington Citizens for Progress, raising money door-to-door and distributing “Vote No” fliers at the town’s annual turkey race.

The group also hired a controversial consultant named Paul Dorr, who for decades has worked to defeat public school referendums across the Midwest. Dorr’s aggressive tactics, which once included burning LGBT children’s library books in another town, only deepened the divide.

The second referendum was defeated by a 2-1 margin on Nov. 8, 2016 — the same day Donald Trump won 62 percent of the vote in Nobles County.

Attitudes have only hardened since then, as three more referendums have failed. Citizens for Progress unsuccessfully tried to oust the superintendent, and a former teacher who shared students’ private information with the group was charged with a crime. Accusations of racism have become commonplace.

The rising tensions reflect broader shifts in the state. Last fall, some Republican candidates called for Minnesota to stop accepting refugees, many of whom are Somali Muslims.

“There was concern among citizens as to the cost of refu­gee resettlement,” said Jeff Johnson, the GOP’s gubernatorial candidate who supported a suspension. “Often the answer was ‘you’re racist.’ It shut down the discussion.”

This town can barely afford the taxes and the middle school that Brink picks kids up from is only 20% white.

So much for white privilege, eh?