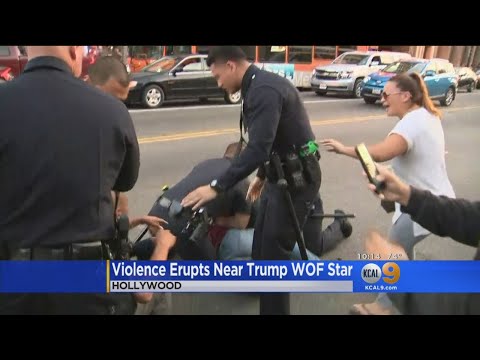 Pro-Trump and Anti-Trump protesters clashed for the 2nd time in four nights on Sunday.

Thursday a Marine Veteran and a man wearing a Trump shirt were attacked by leftists.

[INSANE VIDEO]: Fight breaks out at Donald Trump’s star on Hollywood Boulevard. All because @ElijahSchaffer was wearing a Trump jersey and USA hat.

Be safe out there. The intolerance is real! pic.twitter.com/eGk6pYKiti

Sunday tensions boiled over again as a man in a “Make America Great Again” hat became a target of angry leftists.

CBS2’s Greg Mills was at the location when another brawl broke out Sunday evening.

LAPD tried to keep the pro-Trump forces away from the anti-Trump group.

Mills was there when one vocal Trump detractor in a burgundy shirt ended up being wrestled to the ground by police.

That man was arrested, Mills reported.

On Sunday, there was a man in a Make America Great Again hat speaking into a megaphone.

A group of pro-Trump supporters said the man was not with them as he shouted, “We got America great again’” and other pro-Trump slogans.

His red MAGA had seemed to be a target from some in the anti-Trump crowd.

“The kid’s father came and said hey that’s my son. Don’t be going after my son. Got up in his face. Starts pushing him. Then the guy with the megaphone head-butted him,” said Louie Martinez.“[This guy] came up and said he was going to pull his hat off, and I was like [makes a negative sounding noise] went up and pulled the Make America Great Again hat off and after that everything just went crazy. They started fighting,” said one woman.

The man ended up with a cut on his nose and it was clearly bleeding.

Here’s another view of the Sunday Night scene courtesy of TMZ: