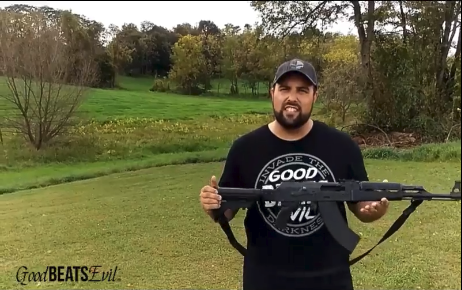 A viral video, that has made its rounds on social media and continues to be “disappeared” from the realms of the Nazis on various platforms, exposes the truth about the one thing in America that, if banned, could save nearly half a million Americans every single year!

The video is produced by the guys at GoodBEATSEvil.com.

In the video, a guy walks toward the camera spouting the numbers of people who lost their lives in 2014. He says that 323,999 people lost their lives due to “AR-15s, AK-47s and other rifles,” but he is quickly corrected by the guy running the camera.

He is informed that those numbers were not the result of any gun, but the murderous hands of Planned Parenthood, and that’s not even counting the number of Americans murdered by other abortion mills.

That’s 887 lives per day lost due to the murderous criminal actions of Planned Parenthood and their hired hitmen and assistants.

That’s a murder every 97 seconds.

So, just how many people lost their lives due to guns? Well, in actuality, zero. Guns don’t just grow legs and go out shooting people, so the answer is simply none.

However, when it came to actual people using their rifles in such a manner, the number was only 248 for the entire year.

Now, look, 248 is still a lot when you think of a crime against people who needlessly died, but honestly, isn’t America’s priorities completely backwards when our God-given right to keep and bear arms is attacked, not just by Democrats but by Republicans, including the current administration, and yet we allow the holocaust of hundreds of thousands of American babies to be slaughtered in the womb every year?

In fact, I was contacted today on my Facebook page with someone sympathetic to the injustices brought about on me by Facebook and referred to “us Trumpers.” I informed this dear lady that I was not a “Trumper,” but a constitutional Christian; and among other things, he has continued to fund Planned Parenthood since he took office with over a billion of your money, making excuses as to why he signs the bills that fund it. She was completely unaware of this believing that he had stopped all funding of Planned Parenthood.

Friends, God is not going to bless a nation that murders the most innocent in its society no matter what you think. America will never be great again because it might obtain a southern wall or have a great economy or because you get a bigger tax break. America will only be great again when we return to what made us great in the first place: A love of God and the Bible and a desire to obey it, to honor Him as God and to promote the Gospel of Jesus Christ as our forefathers did throughout the world. Part of that comes when we repent of the heinous sin of the murder of our children.

In my opinion, this video was an excellent way to communicate the message about what would really save lives in our land.