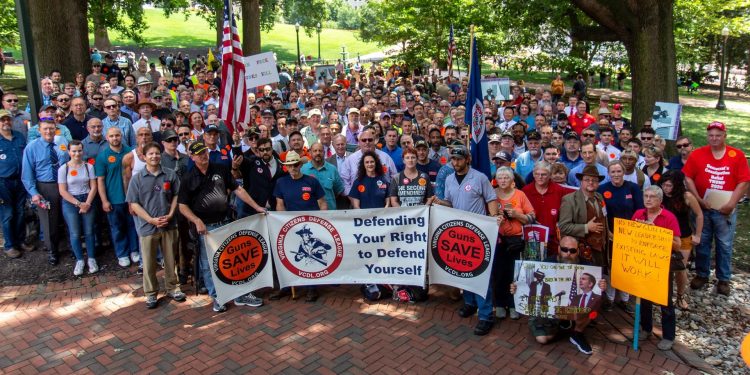 As the tension mounts in Virginia with tyrannical representatives and a governor who doesn’t care for the law seeking to confiscate the people’s guns and even use the national guard against them, the Virginia Citizens Defense League has issued an important statement concerning their upcoming Capitol Lobby Day, and clarifying their various protest days in Virginia.

Here’s VCDL’s statement followed by actual resolve and results in pictures of what they are doing across the state.

There is a distinct difference between the two.

Lobby Day is about, well, lobbying – sending a message to the General Assembly and to the Governor, Attorney General, and the Lt. Governor. That message is simple: no more gun control that in any way, shape, or form negatively affects law-abiding gun owners. Bills that go after criminals or bills that are beneficial to gun owners are fine.

While there have been some verbal threats by the Democrat leadership to push major gun control down the throats of Virginia’s gun owners and some very bad bills already filed to back up that threat, NOTHING has happened yet and won’t until after January 8th 2020. And perhaps it won’t happen at all if we press hard enough.

The second amendment sanctuary movement, with its absolutely massive turnouts of gun owners, is sending a deafening message to lawmakers ahead of Lobby Day. On top of that, we now believe the size of the crowd on Lobby Day could be absolutely incredible, possibly historic if gun owners from around the state follow through and attend as we believe they will. You will absolutely want to be a part of this!

Various militia groups from Virginia and nearby states have graciously volunteered to provide security. With a large Capitol, Richmond, and State police presence, not to mention enough citizens armed with handguns to take over a modern mid-sized country, we have the security base covered nicely. That said, we welcome our militia brothers and sisters to be part of making the day a success! Some militia groups are looking to take canned food donations during Lobby Day and deliver them to a Richmond Food Bank. Please contribute.

If you are asking how you can help with VCDL’s mission, carrying long guns at Lobby Day is not helpful – it is a distraction. Virginia Citizens Defense League’s important messages inevitably get lost as the press rushes to get pictures of anyone carrying an AR or AK. The stories then become about the rifle, not Virginia Citizens Defense League’s agenda. You can set your watch by it. Long guns are not easy to carry in a crowd, either. VCDL needs its voice heard loud and clear in order to able to stop the onslaught of gun-control bills.

Laws you need to know for carry in Richmond

Open carry without a CHP is legal in Virginia, but watch the restrictions in the previous paragraph.

You need a CHP to carry in the General Assembly or Capitol Building. Once through security, you can carry openly or concealed in the buildings. You cannot carry in the gallery over the Senator Floor. Keep an eye on these alerts. Should any of this change, we will notify you here.

We are NOT there to have arguments with the other side. They lobby, we lobby, and never the two shall meet. Just ignore them.

And we are not there to push any other agenda. Our total focus is on protecting our right to keep and bear arms. Period. This is not about flags, statues, history, etc. Just guns.

If you somehow find yourself being harassed by the other side, don’t engage them. They could well be baiting you and recording what you do for propaganda purposes. If necessary, go find a police officer and let them take care of the person causing the disturbance. Otherwise, just ignore them and go about your business.

VCDL has a great relationship with the Capitol Police, the Richmond Police, the Virginia State Police, and most other law enforcement agencies in the Commonwealth. We welcome their presence and are glad they are there to keep everything peaceful, while we work on the job at hand.

This should be a great event, with freedom-loving Americans from all walks of life standing should-to-should to protect our most precious civil right – the right of self-defense. See you there!

Watch VA-ALERT or the Rally Facebook page for more details.

So, are people really turning out in Virginia to protest? They sure are!

Take a look at these photos! The press sure isn’t reporting on this!

Massive turnouts for Board of Supervisors meetings!

Amelia County – standing room only, with crowd overllow through the hall and down to the front of the building. Estimated 600 people.

Shenandoah County – estimated 1,000 gun owners at the meeting, which overflowed into the parking lot!

Russell County – over 1,000 in attendance

Yeah, go ahead tyrants! You think all these people are just going to let you roll over them? I don’t think so.