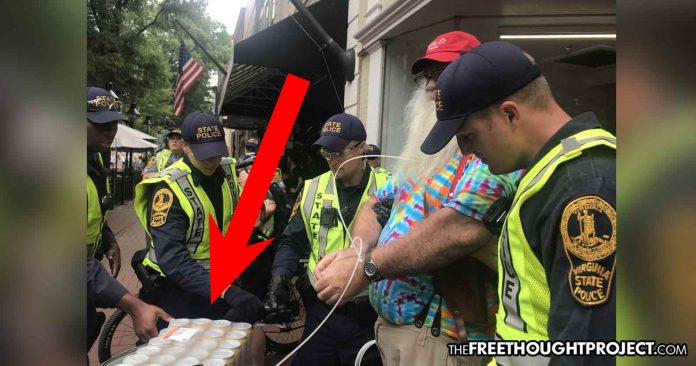 CHARLOTTESVILLE, Va. — (TRI) In a victory for common sense and moderation in how police carry out security protocols, a general district court has granted The Rutherford Institute’s request to dismiss the government’s case against a disabled war veteran who was arrested and charged with a crime after he lawfully purchased cans of Arizona iced tea, aerosol bug spray, a light bulb, and razor blades, all of which were on the City of Charlottesville’s list of temporarily prohibited, potentially “dangerous” items.

John Miska, a disabled war veteran, was charged with violating a City ordinance prohibiting potentially “dangerous” items. Incidentally, the veteran’s guns (not among the list of prohibited items) caused no alarm. In throwing out the charges against Miska, the court ruled that the provision of the ordinance used to justify Miska’s arrest is overbroad and unreasonable and, therefore, unenforceable.

“This case—in which a dozen police swarmed a disabled veteran with a walker buying cans of iced tea and bug spray from a CVS—is far from the only example of a dysfunctional, excessive government that overreaches, overspends, and is completely out of sync with the spirit of the Constitution,” said constitutional attorney John W. Whitehead, president of The Rutherford Institute and author of Battlefield America: The War on the American People. “While this victory is welcome, the battle is far from over.”

One year after the events of August 12, 2017, when civil unrest broke out in Charlottesville over the city’s decision to remove a Confederate statue from a public park, city officials declared a “state of emergency” and established a “security area” around the Downtown Mall, restricting access to the area on August 11 and 12, 2018, and prohibiting the possession of numerous objects within the area that could be considered an “implement of a riot.” City officials also declared that all bags would be “consensually” searched before anyone was allowed to enter the security area.

Using a walker because of his disability, Miska, a 64-year-old disabled war veteran who has been a vocal advocate for veterans’ causes and the First Amendment, entered the security area on August 11, 2018, and proceeded to the Mall’s CVS Pharmacy, which was within a section of the Mall that had been temporarily placed under heightened security restrictions. Miska purchased two cases of Arizona Iced Tea cans and a package of straight-edge razor blades, among other items.

Upon exiting the store, Miska was accosted by a dozen police, who searched the CVS plastic bag containing his purchases. Miska was then handcuffed, arrested and charged with violating Section 18-25 of the City Code and a draconian “emergency” declaration that prohibited anyone from entering the mall in possession of common household items, including metal beverage and food cans, glass bottles, skateboards, aerosol sprays and any other item police considered an “implement of a riot.”

In coming to Miska’s defense, Rutherford Institute attorneys pointed out that while the emergency declaration prohibited individuals from bringing prohibited items onto the mall, it did not prohibit people from lawfully purchasing those items from retail establishments on the mall.

Courtesy of The Rutherford Institute