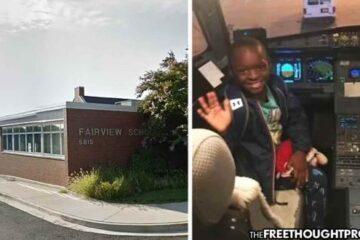 Fairfax, VA — The taxpayers of Fairfax, Virginia were put on notice this week that they will be shelling out tens of thousands of dollars to pay for a school resource officer who couldn’t control his anger and attacked a 5-year-old little boy — for singing in Spanish class.

Pamela Ononiwu, 37, a mother of three, recently settled a lawsuit against Fairfax County Public Schools for the horrifying mistreatment her son suffered while in their care. Ononiwu’s nightmare started on Oct. 3, 2018 when she went to pick up her son, listed as DO in the lawsuit, to bring him to a dentist’s appointment.

Before Ononiwu reached the principal’s office to pick up her son, she could hear him screaming in agony. He was being attacked by a cop — more specifically, he was in a chokehold.

“To my shock and horror, I found my son being put in a chokehold,” Ononiwu said. “This school resource officer was holding him at a 90 degree angle. My son kept trying to kick to get out of it, and the tighter the grip got.”

Ononiwu said her motherly instincts kicked in and she demanded the officer let her son go, though she was worried that the officer may come after her next.

“I repeatedly told him to let my son go. I was scared because I was like, ‘Will I also be shot dead trying to save my son?’ But I said it’s worth it because I’m not gonna be here and let my son die or pass out in front of me,” she said.

Eventually, the officer let her son go and pushed the boy away from him. Equally as shocking as a massive police officer choking a little boy was the reason for the interaction in the first place. When Ononiwu asked why her little boy was being treated in such a violent manner, she was told that DO, who has ADHD, was singingly too loudly in Spanish class. Seriously.

TRENDING: Cop Feels Wrath of Police State as He’s Falsely Arrested for Terrorism and Unable to Get Justice

After the officer finally let her son go, Ononiwu tried to alert the school officials to what just happened to her son. But nobody cared. The school officials had apparently been so conditioned to treating children in this manner that it was entirely normal to them.

“Nobody thought it was heinous that a child was in a chokehold. No one had any empathy,” Ononiwu said.

Frighteningly enough is the fact that it wasn’t only her son who was abused by these monsters in school. Her daughter found herself in a scary situation as well — which is apparently part of the school’s policy.

“Both my son and my daughter have been subject to restraint and seclusion,” she said. “They dragged my daughter one day. My daughter told me they dragged her into a room; her shoes were in the hallway.”

In her lawsuit, in which she was joined by two other parents who faced similar nightmares, Ononiwu called for a change to the abusive practices when it comes to children with special needs.

“There are alternatives. There are other ways to do this. If you are claiming a child has things to work on, the solution isn’t just to throw them in a room. If I did that at home, they’d call Child Protective Services, so I don’t understand why it would be allowed in schools,” she said.

As for her son, no amount of money will ever undo the fear he felt that day and the repercussions that will likely last the rest of his life.

“He told me and another adult that he thought the officer was the devil and he was scared that he was gonna die,” she said.

TRENDING: It Looks Like Elizabeth Warren, Kathy Griffin & Journalists Are Going To Need To Pony Up In Covington Students Defamation Lawsuit

Sadly, Ononiwu’s story is far from unique. Over the years, as the education system becomes more dependent on the police state, violence against children has been steadily increasing. Take a stroll through our archives to find out just how bad it really is.