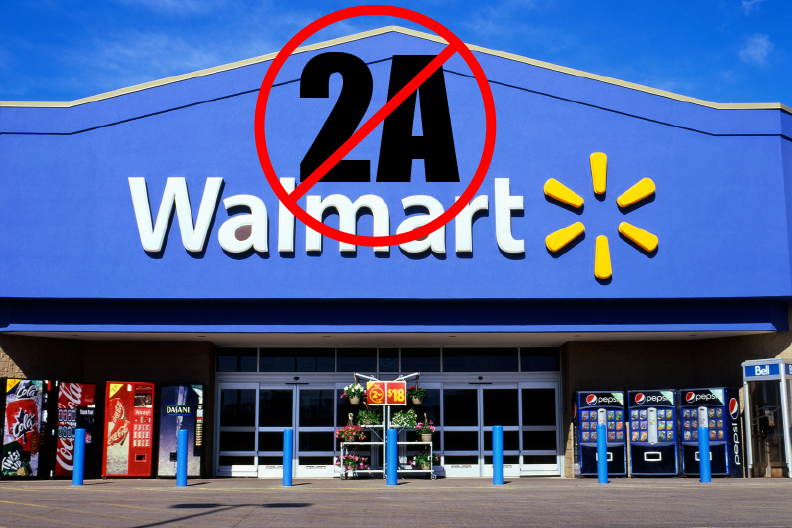 In a very surprising announcement, Walmart has jumped on the anti-gun bandwagon.

I never thought I would see the day, but Walmart has declared itself, no longer open-carry friendly.

After the El Paso incident where an open-carry customer decided to go rogue and shoot up the place. Wait, what’s that? HE WAS NOT AN OPEN CARRY CUSTOMER?

Well, color me confused then. Why are we banning law-abiding customers from open carry, when the only one that committed a crime, did so with the intent of committing a crime?

I am obviously being facetious, because I am trying to emphasize the pointlessness of creating laws and policies that criminals will NEVER care to follow. I cannot imagine there has ever been a scofflaw that said, “Oh darn it! I forgot there was a law against this crime I was about to commit. I probably shouldn’t do it!”

This will solve everything! No more mass shootings at Walmart!

No. That is just not how that works!

The unfortunate result of this stupid asinine policy will be, someone will DEFINITELY get shot now. And Walmart will be on the hook, because of their “policy”.

Right now, no one with any sanity about them would dare shoot an open-carryer at a Walmart. However, as soon as ‘enough people’ get the memo about the new policy of no more open carry, there will be an accident.

Some good ole boy will come into Walmart with their pistol holstered on their hip, or their rifle slung, and a wannabe hero will shoot them, because they KNOW that person was there to cause harm, since the policy obviously says no more open carry.

This is a knee-jerk [emphasis on jerk] policy used to quell the screeching voices of the leftists.

Yet, Walmart is bending knee to them, as if they are the ones that should decide policy for their stores.

In addition to this stupid new policy, Walmart says they will be stocking and selling less ammo.

However, this is simply a way to ‘write-off’ diminishing sales lost to online merchants. This part of the new policies is actually a smart move. Instead of just taking the write-off over selling less and less ammo because they cannot compete with online sales, now they can tell their shareholders, “ooOPS we lost A LOT Of moNEY last qUarteR. soRRY buT wE hAd To stOP SEllING AMMo, To make OuR cusTomERs HaPpY”.

[You might not be familiar with the ‘random-caps’ text meaning. Recently it has taken off as a way to convey sarcasm while writing]

The interesting thing here is, since they are selling less ammo, AND banning open carry at the same time, any losses from people boycotting them over the open carry, will be able to be buried as lost ammo sales, and they will be able to lie to their shareholders for at least two quarters.

I presume in the interest of good will to the community and their DEEP CONCERN for the public at large, they will stop selling beer and wine to reduce DUIs and stop selling cigarettes to protect Public Health.

Spoiler, they will not. In fact, they are suing Texas so they CAN SELL LIQUOR.

I hope they get stung pretty good in their profits from these idiotic reactions to childish adults whining about guns. Walmart used to be an “American company”, but more and more, it is acting against the interest of the public and kowtowing to the SJW babies with this Virtue Signalling idiocy.

Get woke, go broke. Maybe not entirely broke in Walmart’s case, but they will feel the repercussions when they make law-abiding citizens feel unwelcome.

Maybe it’s time to bring back the small/locally owned grocery store. And it’s DEFINITELY time to back Trump for 2020.