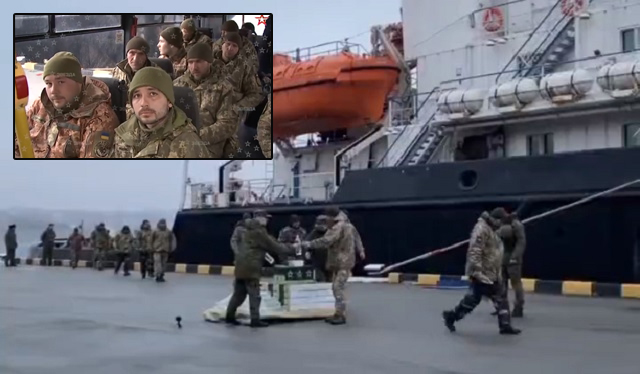 Perhaps the biggest story hyped by the controlled media this week was the tale of 13 Ukrainian soldiers stationed on Snake Island refusing to surrender to a Russian warship and telling them “go f**k yourself” before being blown to smithereens.

A group of Ukrainian border guards were stationed on Snake Island, in the Black Sea south of Odessa, when a Russian warship ordered them to surrender under threat of attack.

They held their ground. All 13 were killed. pic.twitter.com/GMRsXQRSX0

Ukraine's border service said the Russians shelled and captured the island. Zelenskyy confirmed the soldiers were killed and that all would be posthumously honored. Wikipedia is already dubbing this the "Battle of Snake Island." pic.twitter.com/eiZVlVnDMg

What appears to be footage of the Ukrainian garrison of Snake Island surrendering to Russian troops has surfaced; earlier the Ukrainian government had claimed they they refused to surrender and had all died heroically pic.twitter.com/6I6tbQS0Fx On Saturday, the State Border Guard Service of Ukraine put out a statement on Facebook acknowledging they now have “got strong beliefs that all Ukrainian defenders of Zmiiniy Island may be alive.”

They said they were previously operating “according to available information” at the time and their story about Snake Island was based on “preliminary information” before they “lost contact” with those on the island.

“Currently, after receiving information about their probable location, the SBGS together with the Armed Forces is working to identify our soldiers, which is common in open networks,” the State Border Guard Service of Ukraine said. “We sincerely hope that the boys will return home as soon as possible, and the information received at the time of the attack on the death will not be confirmed.”

The SBGSU and the Armed Forces, like the whole of Ukraine, have received hope that all of Zmiiny’s defenders are alive.

Russian media reported that Ukrainian servicemen on the island, who were temporarily occupied by Russia in Sevastopol, had been sent to Sevastopol.

Preliminary information that border guards may be dead came before the defenders lost contact.

As previously reported, on February 24, the aggressor fired from naval weapons and used combat aircraft on border guards and soldiers of the Armed Forces on the island of Zmiiny.

According to available information at the time, the infrastructure was destroyed and the island captured.

Prior to that, the enemy repeatedly tried in vain to intimidate Ukrainian defenders with demands to surrender and received only one correct answer – no one will surrender.

We understand that Russian propagandists know how to make the necessary information attacks and use them, noting that Ukrainian defenders have surrendered.

Border guards and fighters of the Armed Forces bravely defended themselves, especially in the face of the overwhelming means of defeat and enemy forces.

Work to learn about the fate of Ukrainian defenders continued in all possible directions.

Currently, after receiving information about their probable location, the SBGS together with the Armed Forces is working to identify our soldiers, which is common in open networks.

We sincerely hope that the boys will return home as soon as possible, and the information received at the time of the attack on the death will not be confirmed.

The controlled media spread this story to millions. Are any of these sites going to get blacklisted by Google, booted from AdSense and censored on social media for spreading this disinformation to millions?