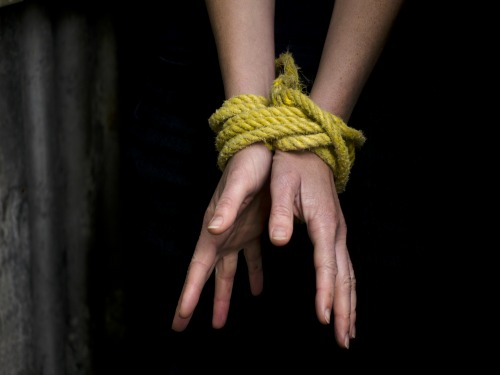 A woman in Colorado who barely escaped a brutal attack at the hands of a registered sex offender is now telling her story.

Vanessa Kinsey (Ursini) shared the details of her horrifying ordeal – including photos of a rope mark around her neck – on Facebook Thursday.

The man who attacked Vanessa is in custody, thankfully. Johnny Dewayne Harris, 38, been sought by the Denver Police Department since March.

He is being held at the Arapahoe County Detention Center and faces charges for sexual assault and kidnapping, reports 9news.com.

Harris told police that he attacked Vanessa by placing a rope around her throat and dragging her into the bushes. He also admitted to sexually assaulting her, and said that as she fought him off, she knocked off his glasses and he couldn’t see. He told police he tied her up while he was looking for his glasses, but she was able to run away, according to an affidavit.

Harris was a history of violence. He was previously sentenced to 15 years in prison in 1999 for sexually assaulting a 15-year-old girl in Texas. In 2016, he was arrested in Denver for exposing himself to a minor and adults.

Denver police said he was accused of kidnapping and sexually assaulting a woman in March and tried to attack another woman the next day.

CBS Denver spoke to Vanessa about her ordeal:

Contributed by Lily Dane of The Daily Sheeple.

Lily Dane is a staff writer for The Daily Sheeple. Her goal is to help people to “Wake the Flock Up!”