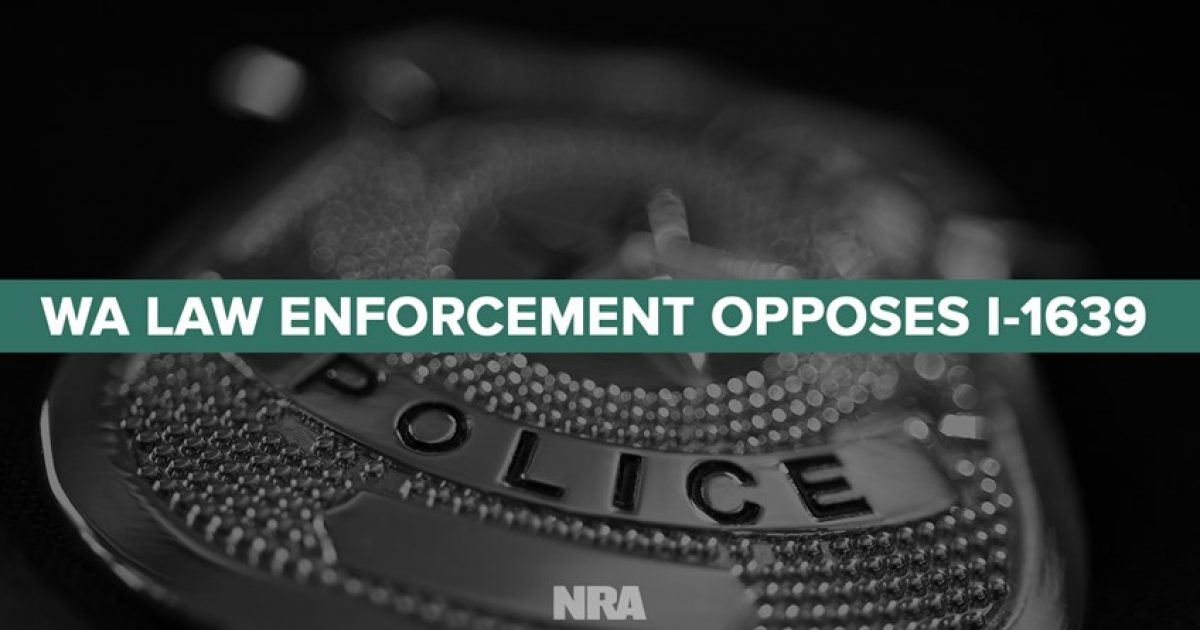 The Second Amendment Foundation and National Rifle Association filed a lawsuit in federal court challenging gun control Initiative 1639 in Washington state last yearafter voters voted to violate the rights of their fellow citizens and the Constitution that protects the rights of those citizens. However, while the state’s attorney general has threatened that sheriffs and police officers are to enforce the law and also threatened that they could be held liable for those who purchase semiautomatic rifles under the age of 21, many are speaking out saying that they have a constitutional duty and have taken an oath to not infringe on the rights of the citizens.

Police chiefs who refuse to enforce Washington state’s new gun restrictions could be liable if that refusal results in someone buying a gun and committing a crime, state Attorney General Bob Ferguson says.

..
The section raising the minimum purchasing age went into effect January 1. The rest of the law, including the enhanced background checks, is to be implemented July 1. The new background checks would be identical to those the state has been performing for handgun buyers for years.

The Seattle Times reported that sheriffs from 13 of the state’s 39 counties have signaled they won’t enforce the law. The Chinook Observer put that number at 20.

In an open letter on Tuesday, Ferguson called out police chiefs and sheriffs who are refusing to enforce the law: “In the event a police chief or sheriff refuses to perform the background check required by Initiative 1639, they could be held liable if there is a sale or transfer of a firearm to a dangerous individual prohibited from possessing a firearm and that individual uses that firearm to do harm.”

The letter also said, “Local law enforcement officials are entitled to their opinions about the constitutionality of any law, but those personal views do not absolve us of our duty to enforce Washington laws and protect the public.”

The attorney general’s open letter noted that local law enforcement has discretion to prioritize its resources, but said, “Enforcement discretion, however, cannot subvert the rule of law.”

Sorry, Mr. AG, but when that “law” is repugnant to the Constitution, it is null and void, and you have no authority to either write the “law” nor enforce it.

The problem is all of this is that voters do not have a right to vote down the God-given rights of other citizens.

Furthermore, threats from the AG to hold sheriffs and police officers accountable for the crimes of other individuals is unconstitutional and highly immoral (Deuteronomy 24:16; Ezekiel 18:20).

Lincoln County Sheriff Wade Magers told Gunpowder Magazine, “The bottom line is that we have Constitutional duties with our oath of office, There’s not anything for sheriffs to enforce yet. Other than the laws sounding good, there’s not much we can do.”

Magers contends that the laws were written and sold to the public in such a way that they distort the duties of a law enforcement officer. The police do not play a part in selling weapons; they do not handle background checks – those are left to the National Crime Information Center within the Federal Bureau of Investigations – and they cannot legally knock on doors to ensure firearm owners are securing their weapons properly. Such action would violate the Fourth Amendment.

“Hypotheticals aside, there really is no practical scenario in which we can enforce any of 1639,” Magers said. “Just because you start an initiative and get a bunch of signatures doesn’t mean it’s right.”

Sheriffs in Okanogan, Cowlitz, Douglas, Benton, Pacific, Stevens, Yakima, Wahkiakum, Mason, and Klickitat Counties also said they will wait until the courts decide on the legality of the laws.

“I’ve taken three public oaths, one in the US Army and Two as a police officer,” Culp wrote on his Facebook page. “All of them included upholding and defending the Constitution of the United States of America. The second amendment says the right to keep and bear arms shall not be infringed. As long as I am Chief of Police, no Republic Police Officer will infringe on a citizen’s right to keep and Bear Arms, PERIOD!”

Sheriff Souvenir, who was placed in office this year, issued a statement saying that his office “will continue to investigate all complaints we receive from our community members but until the legality of Initiative 1639 is resolved by the courts these Initiative matters will be documented only.”

No matter what the courts say, the Constitution is clear: the right of the people to keep and bear arms shall not be infringed. That right is not up for debate, mob vote or majority rule. It is an established God-given right, or liberty, that all men are endowed with by their Creator.

Tyrants don’t believe this because, just as Lucifer did, they want to be God. By the way, this is exactly what the Beast is all about. It’s about a government that believes its laws are higher than the Creator’s laws.