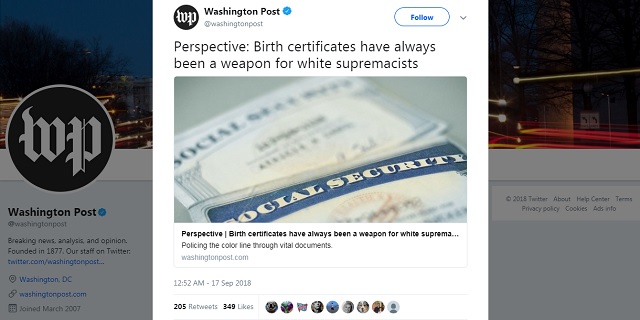 Birth certificates are racist, at least according to The Washington Post.

Perspective: Birth certificates have always been a weapon for white supremacists https://t.co/uJK78POf4x

The Trump administration’s decision to revive and expand the Bush and Obama-era practice of denying U.S. passports to Latinos born in South Texas should come as no surprise. From his assault on Barack Obama’s citizenship to his allegations that Mexican immigrants are criminals and rapists to his promise to institute a Muslim ban, Donald Trump has made it abundantly clear that he believes the only true Americans are white.

But long before Trump rode to prominence promoting birtherism, birth certificates were an important instrument for policing the racial boundaries of citizenship. In the Jim Crow era, states used these seemingly innocuous public records to ensure that the rights of citizenship were accessible to white Americans — and no one else.

Judging by this picture Pearson shared on Twitter with what I’m assuming is her husband, I’d guess they’ve ODed on soy.