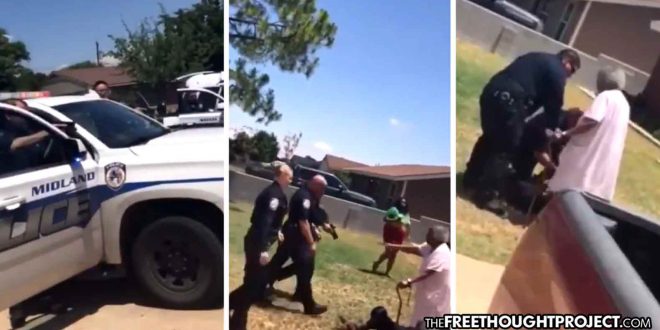 Midland, TX — Police officers in America, can and will enforce the most arbitrary of laws with the most brutal violence. Time after time, TFTP has reported on incidents in which people were maimed, beaten, or even killed for things like window tint and bicycle lights. As the following incident illustrates, being accused of rolling through a stop sign can and will get you in the cross-hairs of multiple police weapons.

The video below was submitted to the Free Thought Project last week, showing the aftermath of Tye Anders allegedly running a stop sign. While countless other folks run stops signs everyday without facing down multiple police rifle barrels, police were on an apparent mission with Anders — and they quite literally pulled out all the guns.

Anders’ “crime” was allegedly driving through a stop sign without completely stopping and then continuing on to his grandmother’s home, just down the block

However, Justin Moore, a civil rights attorney who was hired as Anders’ counsel, claimed Anders did not commit any traffic violation yet he was assaulted by police during the arrest.

As the video shows, Anders appears terrified to get out of his vehicle as there are multiple cops with guns pointed at him. So, he doesn’t immediately exit his vehicle. When he finally does exit the vehicle, he is so scared of getting shot that he lays down on the ground. This was apparently received as a threat by police.

“Upon exiting the vehicle, officers advised the subject to walk towards them to be detained, the subject then stopped and laid on the ground,” Midland Police told News West 9.

As multiple cops barked orders at Anders, his 90-year old grandmother walked towards him with a cane and stood next to him in an attempt to discourage police from murdering her grandson over a petty traffic ticket.

A half-dozen cops then charged Anders with guns pointed at the unarmed man’s head as his grandma holds out her arm to protect him. During the melee, Anders’ grandma is taken to the ground.

“We believe and maintain that this was a stop based on racial profiling and there was no traffic violation,” Moore told News West 9.

Moore says Anders was put in handcuffs and placed in the back of the arresting officer’s squad car, where he was then assaulted by another officer, multiple times in the face, according to the report.

Anders was subsequently charged with evading. According to the report, he was not cited for the alleged stop sign violation.

Prior to this interaction with police, Anders had no criminal record except for possession of less than 2 grams of marijuana — an “offense” that is not even a crime in many states across the country.

“Racial profiling and pretext stops have been at pandemic levels in this country for generations,” Anders’ attorney said. “This incident falls within this age-old trend of following Black men and arresting them for fabricated reasons.”

Running a stop sign is never a good idea, especially in neighborhoods. However, it appears Anders never did that. TFTP has reported on similar incidents in which minority children have faced similar abuse by the police state for things that harm no one.

As TFTP reported last September, two New Jersey Institute of Technology police officers were suspended after they were seen on video forcing a small 15-year-old to the ground and assaulting him over an alleged bicycle infraction. The video was posted to Twitter with the following description:

“If this happened to u at the age of 15 for not stopping what would u do? Justice needs to come for this young 15 yr old boy who was clearly frightened and harassed by NJIT police. This is ridiculous and IT NEEDS TO STOP. ”

As the video shows, you can hear the officers explain the teen is being stopped for a bicycle offense. He ran through a stop sign — on his bicycle. To watch this infuriating incident, click here.