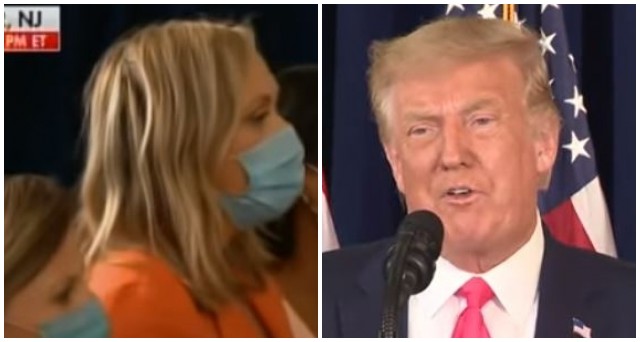 The Democrats and the Republicans just can’t seem to see eye to eye when it comes to ANYTHING and that includes the stimulus checks that many American citizens need in these hard times we are going through.

Democrats want to give illegal aliens checks which is totally unacceptable in my opinion.

Trump slammed Pelosi and Schumer for holding the talks hostage so the President took matters into his own hands.

President Trump announced that he is signing several executive orders to temporarily solve this unnecessary stalemate in front of a group of reporters.

Trump then bashed Democrats for eliminating election safeguards in their proposals.

Following his announcement in Bedminster, New Jersey the president took a few questions from the reporters.

White House reporter Paula Reid attacked the president for going around the Democrats who stalled funds to the American public.

President Trump answered her questions then moved on.

But Paula Reid was not done, ignored the president’s requests and continued to pepper him with questions.

President Trump told her, “No, no… You’re finished.”

But hack reporter Reid was not finished, and continued to bark questions at the President of the United States.

So President Trump ended the presser.